Opening This Week: For Movies Opening May 25

Kam Williams Special to The Skanner News
Published: 25 May 2012 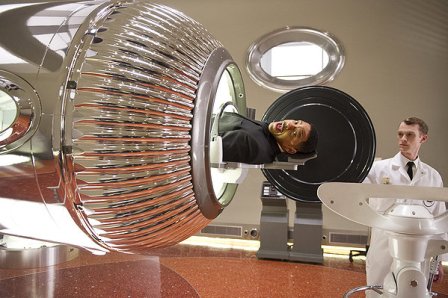 Chernobyl Diaries (R for violence, bloody images and pervasive profanity) Grisly horror flick about a half-dozen tourists who venture to the ghost town created by the Chernobyl Nuclear Power Plant meltdown where they end-up on the run from a race of radioactive mutants. Starring Ingrid Bolso Berdal, Dimitri Diatchenko, Olivia Dudley and Jesse McCarthy.

Men in Black III (PG-13 for violence and suggestive content) Will Smith and Tommy Lee Jones reprise their roles as Agents J and K in a sci-fi sequel which finds the former traveling through a time portal back to 1969 where he has just 24 hours to save both his partner and the planet from an alien assassin (Jemaine Clement) bent on world domination. Support cast includes Josh Brolin, Tim Burton, Alice Eve, Emma Thompson and Bill Hader, with cameos by Lady Gaga and Justin Bieber.

The Intouchables (Unrated) Inspirational buddy dramedy about the improbable bond which blossoms between a wealthy quadriplegic (Francois Cluzet) and the Senegalese street criminal (Omar Sy) he hires as his live-in caretaker. With Anne Le Ny, Audrey Fleurot and Clotilde Mollet. (In French with subtitles)

Oslo, August 31st (Unrated) Day-in-the-life drama about a recovering drug addict (Anders Danielsen Lie) who checks out of residential rehab only to roam the rough streets of the city again after being discouraged by a disastrous job interview. With Hans Olav Brenner and Ingrid Olava. (In Norwegian with subtitles)