Kam Williams Special to The Skanner News
Published: 18 May 2012 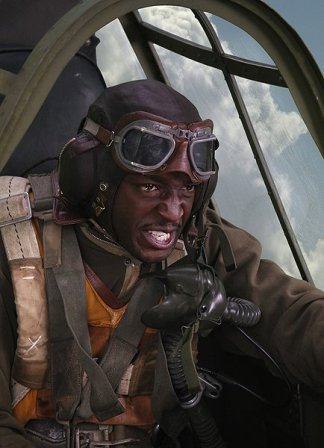 The Tuskegee Airmen were the first African-American aviators ever trained by the U.S. Air Force. Formed in 1940, the historic squadron was stationed on the campus of the Tuskegee Institute in Macon County, Alabama, since the Armed Forces were still racially segregated at the time of its creation.

Even after America entered World War II, the government initially remained reluctant to deploy these pioneering pilots overseas, out of a concern that the presence of black officers in the midst of white soldiers might have a negative effect on military morale. Consequently, the Tuskegee Airmen languished stateside for several years, seeing no action until they were finally cleared for combat in the European theater of operations.

Upon arriving in Italy, their second rate aircraft were upgraded from junky jalopies to state-of-the-art, P-51 Mustang fighter planes, thereby enabling them to escort B-17 bombers on dangerous raids behind enemy lines deep into German territory. The untested pilots proceeded to perform admirably on over 1,500 successful missions, demonstrating an unexpected combination of competence and valor in the process.

'Red Tails' is a special-effects driven adventure which recreates their daring exploits in the skies while simultaneously chronicling their quest for dignity in the face of the humiliation mandated by Jim Crow.The movie marks the feature film debut of Anthony Hemingway and was produced by the legendary George Lucas. The film features an ensemble cast topped by Academy Award-winner Cuba "Show me the money!" Gooding (for "Jerry Maguire") and Oscar-nominee Terrence Howard (for "Hustle & Flow").

Aside from raising the question of the arbitrary color line, the plot reads like your typical, cliché-ridden war flick revolving around a tight-knit, motley crew of colorful characters. Each is based on a simplistically-drawn archetype, like the ill-fated pilot you know isn't long for this world the moment he's shown sitting in his cockpit gazing fondly at a picture of his fiancée right before takeoff.

Another familiar figure is the cigar-chomping Major (Gooding), a paternalistic pontificator given to delivering inspirational speeches about God, mom and apple pie. He cares about each of the men under his command, including alcoholic "Easy" Julian (Parker); daredevil "Lightning" Little (David Oyelowo); class clown "Joker" George (Elijah Kelley); and "Junior" Gannon (Tristan Wilds), a youngster who yearns to be taken seriously by his teasing colleagues.

Meanwhile, back at the Pentagon, we find exasperated Colonel A.J. Bullard (Howard) tirelessly lobbying the military brass to put an end to racial discrimination in the ranks. Ultimately, the film proves more memorable for its eye-popping, action sequences than for its corny dialogue which ranges from  preachy ("We're on the side of God Almighty!") to trite poster-speak ("Let's give those newspapers something to write about!").

Nonetheless, Red Tails amounts to a worthy, overdue tribute to a group of intrepid, World War II heroes who never let their second-class status diminish their patriotism even one iota.

Rated PG-13 for violence and profanity.