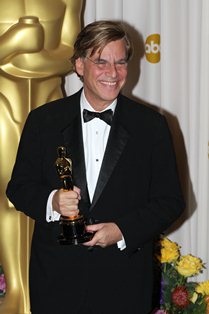 (CNN) -- Aaron Sorkin, the celebrated screenwriter whose punchy dialogue propelled TV's "The West Wing" and the Facebook movie "The Social Network," will write and direct an upcoming film on the life of Apple co-founder Steve Jobs.

Sony Pictures has confirmed that Sorkin will adapt "Steve Jobs," the in-depth biography of the tech icon that was written by Walter Isaacson and released shortly after Jobs' death last year.

"Steve Jobs' story is unique: he was one of the most revolutionary and influential men not just of our time but of all time," Amy Pascal, co-chair of Sony Pictures Entertainment, said in a written release.

"There is no writer working in Hollywood today who is more capable of capturing such an extraordinary life for the screen than Aaron Sorkin; in his hands, we're confident that the film will be everything that Jobs himself was: captivating, entertaining, and polarizing."

Sony reportedly wanted Sorkin for the film and began courting him immediately after securing the rights to Isaacson's book late last year.

Sorkin actually knew Jobs and wrote a piece for The Daily Beast about his memories of Jobs after his death. He wrote that he and Jobs had developed a "phone friendship" that led Jobs to invite him to write a movie for Pixar (the animation studio Jobs ran) and to tour Apple.

"I told him I'd take him up on it and I never did," Sorkin wrote. "But I still keep thinking about that Pixar movie. And for me, that's Steve's legacy. That, and the fact that I wrote this on a Mac."

Another Jobs movie is also in the works. An independent film starring "That '70s Show" alum Ashton Kutcher is scheduled to begin filming in May.