Kam Williams Special to The Skanner News
Published: 04 May 2012 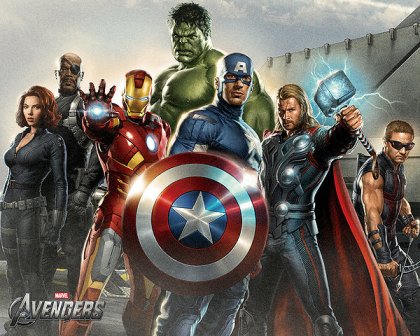 "The Avengers" is the sixth installment in the Marvel Cinematic Universe franchise launched in 2008 with "Iron Man," and followed by "The Incredible Hulk," "Iron Man 2," "Thor" and "Captain America." What makes this adventure unique is that it's the first in the series to revolve around a team of comic book superheroes.

The actors playing those title characters reprise their roles with the exception of Edward Norton who has been replaced as The Hulk by Mark Ruffalo. Otherwise, we again have Chris Hemsworth as Thor, Robert Downey, Jr. as Iron Man, and Chris Evans as Captain America. The film also features the return of Jeremy Renner as Hawkeye and of Scarlett Johansson as Black Widow, who appeared in "Thor" and "Iron Man 2," respectively.

Since we've already met all the members of The Avengers, director Josh Whedon doesn't have to waste time familiarizing us with their unique abilities. Instead, the plot unfolds right on the heels of the post-closing credits scene of the previous sequel which had Nick Fury (Samuel L. Jackson) ominously enlisting the assistance of Captain America for a dangerous mission with global ramifications.

So, it's no surprise that, at this picture's point of departure, we find Fury assembling The Avengers. After all, as the director of the top secret espionage agency, S.H.I.E.L.D. (an acronym for Strategic Home Intervention, Enforcement and Logistics Division), it is his job to protect humanity, especially from a diabolical villain bent on world domination.

In this case, that would be Thor's evil, presumably-exiled brother, Loki (Tom Hiddleston), who has managed not only to escape from an outer space abyss on Asgard but has gotten his hands on the Tesseract, a cosmic cube containing the key to limitless, sustainable energy. With Loki en route to Earth, it falls to Fury to plan a coordinated defense of the planet.

That task proves easier said than done, since it calls for cooperation among individualistic superheroes with fragile egos who aren't used to sharing the limelight. Thus, we are treated to pre-showdown posturing when Iron Man teases Thor about both his accent and costume by asking, "Doth mother know thy wear her drapes?" Or when he sarcastically compliments Dr. Bruce Banner (aka The Hulk) by saying, "I'm a big fan of how you lose control and turn into a giant green monster."

Of course, such witty banter subsides in favor of camaraderie once Loki arrives with his army of alien warriors called Chitauri. Each Avenger's talent comes in handy, of course, during the ensuing, eye-grabbing fight sequences, including Hawkeye's bow-and-arrow, Thor's hammer, Captain America's shield, and so forth.

Between a sophisticated script and thrill-a-minute special effects, "The Avengers" easily adds up to the best Marvel Comics screen adaptation yet. A remarkable treat which only serves to ramp-up audience expectations for the vaunted franchise's next offering, "Iron Man 3."

Rated PG-13 for intense violence and a drug reference.