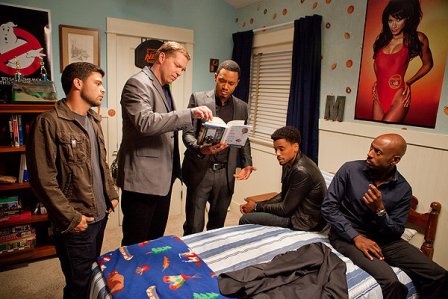 Chimpanzee (G) Tim Allen narrates this Disney documentary about a 3 year-old chimp named Oscar who finds himself adopted by an adult male from another clan after being separated from his own family in the wilds of the Ivory Coast's jungle.

The Lucky One (PG-13 for violence and sexuality) Zac Efron and Taylor Schilling co-star in this screen adaptation of Nicholas Sparks' best-seller about a Marine sergeant's search for the woman whose photo he credited with saving his life while serving in Iraq. With Blythe Danner, Riley Thomas Stewart and Jay R. Ferguson.

Think Like a Man (at left, PG-13 for sexuality, crude humor and brief drug use) Battle-of-the-sexes comedy revolving around four buddies who try to turn the tables on the objects of their affection after learning that the ladies are relying on relationship advice from Steve Harvey's best-seller. Ensemble cast includes Kevin Hart, Taraji P. Henson, Michael Ealy, Meagan Good, Gabrielle Union and Morris Chestnut, with cameos by Wendy Williams, Sherri Shepherd, Chris Brown and Ron Artest.

Darling Companion (PG-13 for profanity and sexuality) Midlife crisis comedy, set in the Rockies, about a neglected housewife (Diane Keaton) who enlists the assistance of a psychic gypsy (Ayelet Zurer) and the local sheriff (Sam Shepard) after her narcissistic husband (Kevin Kline) loses track of their dog during a walk while talking on his cell phone. With Dianne Wiest, Richard Jenkins and Mark Duplass.

Fightville (Unrated) "I coulda' be a contender" documentary following a stable of aspiring Southern Louisiana fighters' as they attempt to move up the Mixed Martial Arts ranks.

Jean Gentil (Unrated) Unemployment saga about a recently-fired, French professor from Haiti (Jean Remy Gentil) whose faith is tested while he looks for another job in Santo Domingo. With Lys Ambroise, Nadal Walcott and Paul Henri Presume'. (In Spanish with subtitles)

Marley (at left, PG-13 for violent images, mature themes and incessant cannabis consumption) Reverential biopic chronicling the musical career and spiritual philosophy of Bob Marley (1945-1981), the lead singer/songwriter/guitarist of The Wailers, the legendary Rastafarian reggae group from the island of Jamaica. Featuring archival concert and interview footage, plus present day reflections by friends and family, including his widow Rita, son Ziggy and contemporary Jimmy Cliff.

The Moth Diaries (R for sexuality, profanity, drug use and graphic images) Psychological thriller about the descent into insanity of a grieving student (Sarah Bolger) at an exclusive boarding school in the wake of the arrival of a mysterious new classmate (Lily Cole) she thinks is up to no good. Cast includes Scott Speedman, Sarah Gadon and Ann Day-Jones.

My Way (R for graphic violence) World War II drama about a young man (Dong-gun Jang) from occupied Korea who has to put his dream of running the marathon in the Olympics on hold when he is drafted into the Japanese army. With Jo Odagiri, Bingbing Fan and In-kwon Kim. (In Korean, Japanese and Russian with subtitles)

Snow on tha Bluff (at left, R for violence, brief nudity, alcohol abuse, pervasive profanity and incessant drug use) Bad boy biopic about notorious Atlanta crack dealer/armed robber Curtis Snow who shot this documentary with a camera he acquired in a holdup. With Cat Erickson, Adrienne Lockett and Frank Ringer.

To the Arctic (G) Meryl Streep narrates this 3-D documentary highlighting a mamma polar bear's attempt to raise her two cubs while adjusting to the challenges posed by climate change.

Whore's Glory (Unrated) Prostitution documentary exploring the world's oldest profession as practiced at ports of call all over the world. (In German, French, English, Thai, Japanese, Spanish and Bengali with subtitles)