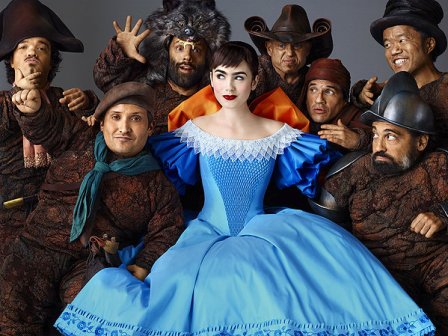 Mirror Mirror (PG for action and mild crude humor) Overhaul of beloved classic fairytale has exiled Snow White (Lily Collins) returning to the kingdom to wrest both the throne and a handsome prince (Armie Hammer) from the clutches of the evil queen (Julia Roberts) with the help of seven dwarfs. With Nathan Lane, Mare Winningham and Michael Lerner.

Wrath of the Titans (PG-13 for action and intense violence) Fantasy sequel, set a decade after the conclusion of "Clash," finds demigod Perseus (Sam Worthington) embarking on a perilous descent into the underworld for an epic showdown with the Titans in order to save humanity and to rescue his father, Zeus (Liam Neeson). Cast includes, Ralph Fiennes, Edgar Ramirez and Bill Nighy.

The Beat Hotel (Unrated) "Cool, Daddy-o!" documentary revisiting the dive located in the Latin Quarter in Paris which became the haunt and home of literary American expatriates in the late Fifties, beatniks like Allen Ginsberg, Greg Corso and William Burroughs.

Goon (R for drug use, graphic sexuality, brutal violence and pervasive profanity) Seann "Stiffler" Scott stars in this overcoming-the-odds hockey comedy about a halfwit bouncer who leads a ragtag, semi-pro team of misfits to glory on the ice. With Eugene Levy, Jay Baruchel and Alison Pill.

I Kissed a Vampire (Unrated) Gory, Goth musical about a teenager Lucas Grabeel) who develops fangs and an insatiable lust for blood after being bitten in the neck by an exchange student (Tahlena Chikami) from Transylvania. With Drew Seeley, Adrian Slade and Chris Coppola.

The Island President (PG for violence, smoking and mature themes) Climate change documentary chronicling the effort of Maldives President Mohamed Nasheed to save his low-lying island nation from being sinking into the Indian Ocean as a consequence of global warming.

Turn Me On, Dammit! (Unrated) Coming-of-age comedy about the sexual awakenings of a 15 year-old girl (Helene Bergsholm) with raging hormones who fantasizes not only about the classmate (Matias Myren) she has a crush on but about practically every guy she encounters. With Malin Bjorhovde, Henriette Steenstrup and  Beat Stofrin. (In Norwegian with subtitles)

Womb (Unrated) Deliberately-paced romance drama about a grieving woman (Eva Green) confronting an ethical dilemma after allowing herself to become impregnated with a clone of her dearly-departed childhood sweetheart (Matt Smith) after a tragic accident. Featuring Lesley Manville, Peter Wight and Hannah Murray.