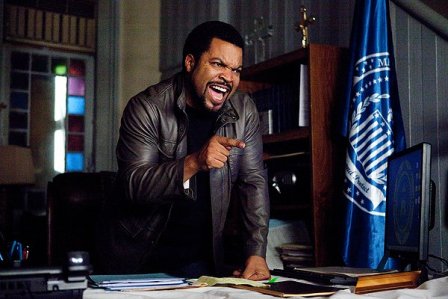 Crime comedy about a couple of siblings (Will Ferrell and Diego Luna) who land in a turf war with a Mexican mobster (Gael Garcia Bernal) when they take desperate measures to save their father's ranch. With Efren Ramirez, Genesis Rodriguez and Adrian Martinez. (In English and Spanish with subtitles)

Delicacy (Unrated) Romantic romp about a French widow (Audrey Tautou) who finds herself courted by a Swedish co-worker (Francois Damiens) while still mourning the loss of her husband. Support cast features Bruno Todeschini, Melanie Bernier and Pio Marmai. (In French and Swedish with subtitles)

The FP (R for sexuality, nudity, pervasive profanity and brief drug use) Musical comedy about a couple of rival gangs vying for control of a local park who decide to settle their differences in a deadly dance competition. Cast includes Jason Trost, Art Hsu, Caitlyn Folley and Lee Valmassy.

Free Men (Unrated) WWII saga, set in German-occupied Paris, revolving around an Algerian immigrant (Tahar Rahim) who becomes inspired to join the Resistance after being befriended by a Jewish singer (Mahmud Shalaby). With Michael Lonsdale, Lubna Azabal and Farid Larbi. (In French with subtitles)

Jeff, Who Lives at Home (R for profanity, sexual references and drug use) Late bloomer comedy about a 30 year-old slacker (Jason Segel), still living in his parents' basement, who discovers his destiny while running an errand for his mother (Susan Sarandon). With Ed Helms, Judy Greer and Rae Dawn Chong.

The Kid with a Bike (Unrated) Bittersweet drama about an abandoned 12 year-old (Thomas Doret) who is rescued from a beggar's farm by a hairdresser (Cecile de France) performing a random act of kindness. With Jeremie Renier, Egon Di Mateo and Olivier Gourmet. (In French with subtitles)

Reuniting the Rubins (PG for mature themes and mild epithets) Dysfunctional family comedy about an uptight attorney (Timothy Spall) who reluctantly postpones a vacation to reunite his estranged offspring at Passover for the sake of his ailing mother (Honor Blackman). Featuring Rhona Mitra, James Callis,Hugh O'Conor and Loo Brealey.

Saviors in the Night (Unrated) Holocaust drama, set in Westphalia in 1943, based on the memoir of Marga Spiegel (Veronica Ferres) recounting how her family was saved from Hitler's concentration camps by neighbors who hid them on a farm. With Armin Rohde, Luisa Mix and Lia Hoensbroech. (In French, German and English with subtitles)

Seeking Justice (R for violence, profanity and brief sexuality) Nicolas Cage stars in this revenge thriller about a man who enlists the assistance of a vigilante group to settle the score with the creep who had brutally raped his wife (January Jones). With Guy Pearce, Jennifer Carpenter and Harold Perrineau. (In English and Italian with subtitles)