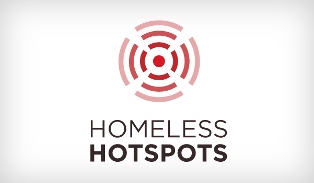 BBH Labs, a unit of the global marketing agency BBH, gave 14 people from a homeless shelter mobile Wi-Fi devices and T-shirts that announced "I am a 4G Hotspot."

BBH New York chairwoman Emma Cookson says the company paid them a minimum of $50 a day. She called the experiment a modernized version of homeless selling street newspapers.

But many have called the program exploitive. Wired.com wrote that it "sounds like something out of a darkly satirical science-fiction dystopia." ReadWriteWeb called it a "blunt display of unselfconscious gall."

The experiment was meant to begin last Friday but rain delayed its implementation until Sunday. It stopped Monday.