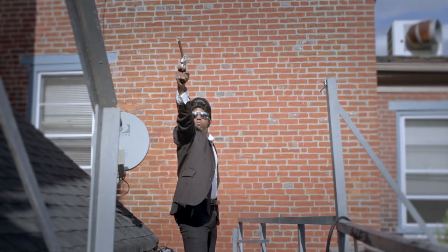 Ordinarily, the term "Velvet Elvis" conjures up images of those cheesy paintings of Elvis Presley which were popular briefly back in the Seventies. But for the purposes of this hilarious horror comedy, the phrase refers not to a tacky eyesore on black velvet but to a black Elvis impersonator outfitted in The King's trademark pompadour, muttonchops and TCB sunglasses.

Nicknamed Velvis (Kirk Ponton), he's been doggedly pursuing his dream of superstardom in a Hollywood which looks suspiciously like Trenton to this former resident of New Jersey's capital city. At the point of departure, we find our hero doing his best Elvis impression until he's driven offstage by a merciless heckler (Kurt Tazelaar), a cruel reminder of why he still pays his bills by moonlighting as a pistol-packing demon hunter.

He is assisted in both endeavors by his trusty agent/manager Samael (Kevin Ridgeway), a sidekick who seems to have more luck locating monsters than landing gigs. Equipped only with a .357 magnum and the head of a vampire stashed away in a bowling bag, the dynamic duo is presently perambulating Tinseltown's ugly underbelly in search of Seth (Michael Markiewicz), a simpleminded serial killer doing the bidding of a sultry, if bloodthirsty, disembodied specter called Lamia (Jensen Bucher).

So unfolds "The Velvet Elvis," a genre-defying splatterflick directed by Jeff Stewart. The movie marks the sophomore offering of the promising Temple Film School grad who also shot his first picture, "The Reunion," on location in his hometown of Trenton.

Anybody lamenting the lack of diversity of roles for African-American thespians ought to credit this up-and-coming black director to be reckoned with for the colorblind casting of a brother as his title character. For the talented Mr. Ponton proves not only entertaining but oh so convincing in his capacity as a sepia-skinned Elvis.

The film also features praiseworthy support performances by Michael Markiewicz, Kevin Ridgeway, Jensen Bucher and Kacie Marie, as well as a couple of memorable cameos by Scott Miller as a deferential john with a masochism fetish and Lawrence Greenberg playing a proverbial dead guy.

Serving up as much mirth as mayhem per minute, better brace yourself for a rollicking, non-stop, roller coaster ride that won't end until Velvis has left the theater!

See a trailer for The Velvet Elvis