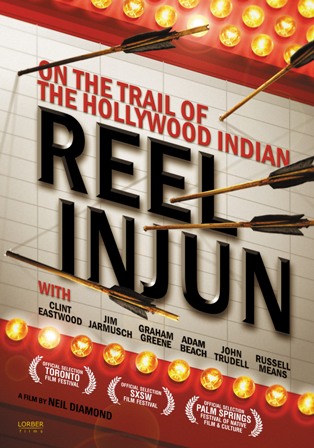 If you think blacks and Asians have been given a raw deal in the way they've been portrayed in Hollywood pictures, then you should reflect upon the harmful depictions of Native Americans on film. For, this beleaguered ethnic group has generally been stereotyped in a very limited fashion, namely, as deserving of extermination or being driven to reservations.

In most movies, Indians are bloodthirsty savages who get wiped out right after you hear the bugle signaling the arrival of the cavalry. My impression of this country's indigenous peoples was so perverted by exposure to Westerns that one of my favorite childhood pastimes was playing "Cowboys and Indians," an activity in which I took pleasure in fantasizing about killing adversaries with red skin.

An important aspect of learning is to unlearn propaganda, and this is particularly important for minorities in the United States. That is one of the salient points driven home in Reel Injun, a telling documentary co-directed by Dustin Diamond, Catherine Bainbridge and Jeremiah Hayes. For, in this eye-opening expose', they interview fellow natives who shamefully admit that they had grown up cheering for the white man while watching Westerns.

Such is the power of cinema, that even the descendants of the original inhabitants of this country could easily be manipulated to embrace as heroes the invaders who had slaughtered their ancestors. That's because, "The only good Injun is a dead Injun" was an unchallenged, recurring theme so pervasive that no one seems to discuss the legitimacy of the ethnic cleansing which decimated the ranks of every tribe across the nation.