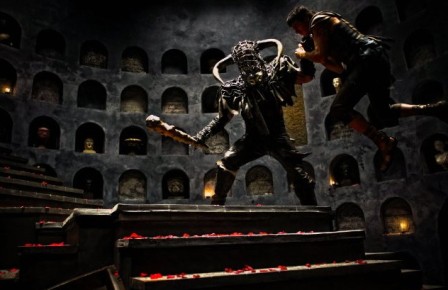 Immortals (R for graphic violence and a sex scene) Action fantasy, steeped in Greek mythology, about a lowly stonemason (Henry Cavill) picked by Zeus (Luke Evans) to assemble a band of intrepid warriors for a bloody showdown with a rampaging, ruthless titan (Mickey Rourke) who has declared war on humanity. With Isabel Lucas, Stephen Dorff, John Hurt and Freida Pinto.

11-11-11 (Unrated) Psychological thriller about a best-selling author (Timothy Gibbs) who moves to Barcelona to recover from the loss of his family in a house fire set by a fan only to learn that the number 11 is fated to remain his unlucky number forever. With Wendy Glenn, Michael Landers, Denis Rafter and Salome Jimenez.

Elite Squad: The Enemy Within (Unrated) Brazilian crime thriller, set in Rio de Janeiro, revolving around a high-ranking prison official (Wagner Moura) called upon to clean up police corruption in the wake of a riot during which some inmates were executed. With Irandhir Santos, Andre Ramiro and Maria Ribeiro. (In Portuguese with subtitles)

God's Fiddler (Unrated) Reverential biopic about Jascha Heifetz (1901-1987), a violin virtuoso considered one of the greatest classical musicians of all time.

The Greening of Whitney Brown (PG for brief profanity) Fish-out-of-water comedy about a spoiled 'tweener (Sammi Hanratty) who learns a big lesson about what really matters in life with the help of a horse after her family moves from Philly to the country because of financial woes. With Brooke Shields, Aidan Quinn, Keith David and Kris Kristofferson.

Into the Abyss (Unrated) Werner Herzog directed this Death Row documentary based on a series of interviews with relatives of the victims of a triple murder as well as the killer, a week before the 28 year-old condemned man was scheduled to fry.