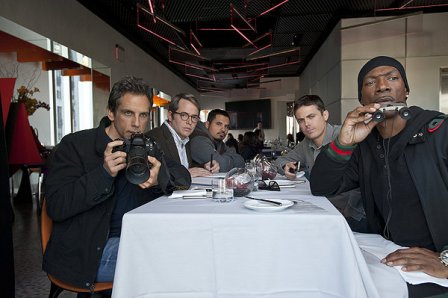 By the time Wall Street titan Arthur Shaw (Alan Alda) was charged with running a billion-dollar Ponzi scheme, it was already too late for the authorities to find the fortune that he had ostensibly hidden in offshore accounts. As a condition of being released on bail before trial, he was ordered kept under house arrest in his luxury penthouse at The Tower, an exclusive high-rise located on Central Park West.

While this development might have prevented the arrogant embezzler from becoming a fugitive of justice, it simultaneously left him surrounded by some of those he'd swindled. For, not only had he stolen from the wealthy, but he had also talked the staff at The Tower into trusting him with all the assets in their pension fund.

Reluctant to let Shaw walk away with their money, the group hatches a plan to take the law into its own hands, upon learning that the remorseless embezzler has stashed about $20 million in cash somewhere in his condo. After all, as employees, they certainly have intimate knowledge about and unusual access to the inner workings of The Tower, although they will still need the help of a real crook, since none of them have ever cracked a safe before.

So, Josh enlists the assistance of Slide (Eddie Murphy), a motor-mouthed petty thief he's occasionally encountered on the street. Once Slide joins the conspiracy, the only remaining hurdles involve first gaining access to an apartment guarded by the FBI, and then robbing it right under the nose of the accused who's restricted to the premises, 24-7.

This is the promising premise of Tower Heist, the latest buddy comedy directed by Brett Ratner. While the teaming of Eddie Murphy and Ben Stiller doesn't come close to matching the inspired, screen chemistry of Chris Tucker and Jackie Chan in Ratner's Rush Hour trilogy, the talented twosome nevertheless manage to generate enough laughs, with the help of a colorful support cast, to make you forgive the fact that the crime caper grows increasingly improbable the further the film unfolds.

A funny, if farfetched, revenge fantasy for folks bilked by the likes of Bernie Madoff.

Rated PG-13 for profanity and sexuality.