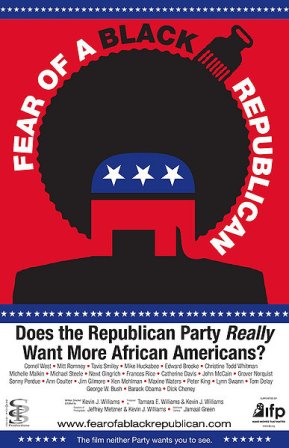 That sorry state of affairs inspired Tavis Smiley to remark that, "You can fit all the Black Republicans with any clout into a phone booth." And they're probably also about as hard to find as a phone booth is nowadays.

This phenomenon was not lost on Kevin Williams, a white Republican from Trenton, New Jersey, who felt frustrated by the fact that the Democrats had a stranglehold on all the political positions in his predominantly African-American hometown. So, as a filmmaker, he decided to shoot a documentary getting to the bottom of why Blacks aren't represented in the Republican Party.

Is it that the GOP would prefer to remain lily-white or are African-Americans simply short-changing themselves by remaining so loyal to the Democratic Party? That fundamental question rests at the heart of Fear of a Black Republican, an eye-opening expose' supplying a variety of intriguing answers.

Whether it's up to white Republicans or jaded Black Democrats looking for an alternative to make the first overture, Fear of a Black Republican might serve as a great conversation breaker to encourage both camps to bury the hatchet and to give each other serious consideration as a viable political partner. However, I wouldn't hold my breath waiting for the GOP to reflect the all-inclusive rainbow the Party envisioned during more enlightened times when Abraham Lincoln freed the slaves and a plethora of Black Republican candidates ran successful campaign for political office.