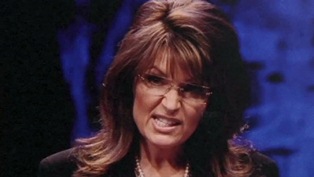 Fair warning: This revealing expose' is not for diehard supporters of Sarah Palin. The damning biopic essentially paints the former governor of Alaska as less of a Mama Grizzly Bear than a power-hungry witch who goes to great lengths to crush her adversaries, whether they be political or personal.

"Sarah Palin: You Betcha!" is directed by Nick Broomfield, who also stars in the alternately humorous and eye-opening documentary. Like a British mix of Borat and Michael Moore, he crisscrosses Alaska, stopping of course in his subject's hometown of Wasilla, to sort the truth from fiction in terms of all the ugly rumors that have been leveled against Palin since she entered the public consciousness during the run-up to the 2008 presidential election.

What Broomfield finds is that most of the natives are reluctant to appear onscreen, ostensibly out of a fear of suffering reprisals for cooperating with his project. As a result, most of the folks who do talk had been so betrayed by Palin that they were not inclined to mend fences.

For instance, John Stein laments how in 1996, when he was the incumbent mayor of Wasilla, he was stabbed in the back by his protégé, Sarah Palin. She not only declared her candidacy for his job but proceeded to run campaign ads that called to replace him with a Christian. So much for separation of church and state.

In another sequence, Palin's ex-brother-in-law recounts how upon becoming governor, Palin decided a top policy matter would be getting him fired from the Alaska State Troopers because he was divorcing her sister. That case has received loads of media attention in recent years, but others in the film testify that this sort of vindictiveness was typical, that she exhibited an unusual interest in matters which affected her family. Meanwhile, she ostensibly ignored the business of government, often e-mailing and text-messaging instead of paying attention during official meetings and hearings.

As for Sarah's side of the story, the intrepid, absurdly plaid clad Broomfield is shown sticking a microphone in her face in public on several occasions. And while she politely agreed to a tete-a-tete at a more convenient time to talk, her office apparently never returned any of his calls.

A hatchet job or an accurate portrait of a Machiavellian manipulator? That's apt to depend on whether you lean to the left or to the right.

To see a trailer for "Sarah Palin: You Betcha," visit: http://www.youtube.com/watch?v=5RwWXs2NvII