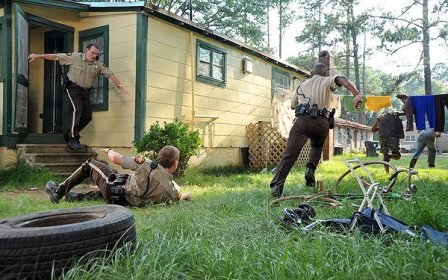 50/50 (R for sexuality, drug use and pervasive profanity) Bittersweet dramedy about a 27 year-old writer (Joseph Gordon-Levitt) who learns what's most important in life after being given a 50/50 chance of beating a rare form of spinal cancer. With Anjelica Huston, Seth Rogen, Anna Kendrick, Bryce Dallas Howard and Philip Baker Hall.

Courageous (PG-13 for violence and drug use) Alex Kendrick wrote, directed and co-stars in this faith-based parable about the trials and tribulations of four colleagues facing different ethical dilemmas while serving on the Albany, Georgia police force. Cast includes Ken Bevel, Ben Davies and Kevin Downes.

Dream House (PG-13 for violence, terror, sexuality and brief profanity) Psychological thriller about a married couple (Daniel Craig and Rachel Weisz) whose relocation from NYC to a quaint New England town leaves their family the target of the same sadistic killer who had brutally murdered the previous owners of their new home. With Naomi Watts, Marton Csokas and Jane Alexander.

What's Your Number? (R for sexuality and profanity) Screen adaptation of Karyn Bosnak's best-seller "20 Times a Lady," a romantic romp revolving around a marriage-minded young woman (Anna Faris) who decides to track down all of her former boyfriends to determine whether one of her exes might be her one true love. With Chris Evans, Blythe Danner, Andy Samberg and Ed Begley, Jr.

American Teacher (Unrated) Matt Damon narrates this reverential documentary which pays tribute to the country's 3.2 million teachers by profiling the careers of a quartet of dedicated educators.

Bunraku (Unrated) Revenge saga about a drifter (Josh Hartnett), a bartender (Woody Harrelson) and a samurai (Gackt) who join forces to take on a ruthless mobster (Ron Perlman) with an army of 9 assassins. With Demi Moore, Shun Sugata and Kevin McKidd. (In English and Japanese with subtitles)

Connected (Unrated) Filmmaker Tiffany Shlain is the subject of this cinematic autobiography exploring such themes as love, death and technology.

Take Shelter (R for profanity) Paranoia drama about a working-class family man (Michael Shannon) plagued by apocalyptic visions who finds himself struggling with whether or not to have his wife (Jessica Chastain) and daughter (Tova Stewart) hide in a backyard bunker he's built as protection from the conflagration he believes is imminent.

Tucker & Dale vs. Evil (R for profanity, graphic violence and brief nudity) Horror comedy about a couple of West Virginia hillbillies (Tyler Labine and Alan Tudyk) who are mistaken for chainsaw killers by a group of vacationing college kids after saving one of them (Katrina Bowden) from drowning. With Jesse Moss, Philip Granger and Brandon Jay McLaren.

You Don't Like the Truth (Unrated) War on Terror documentary culled from surveillance tapes recorded at Guantanamo during the four days of the interrogation of a Canadian teenager named Omar Khadr who was captured on the battlefield in Afghanistan.