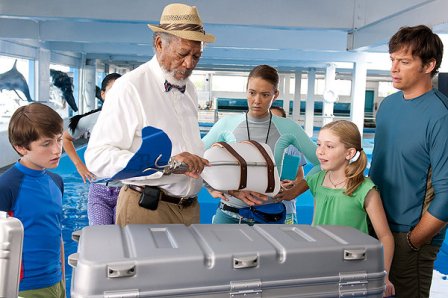 Abduction (PG-13 for sexuality, teen partying, intense violence and brief profanity) John Singleton directs this action thriller about a teenager (Taylor Lautner) who ends up on the run from a team of hit men when he tries to determine his true identity after seeing his baby photo on a missing persons website. With Sigourney Weaver, Alfred Molina, Maria Bello and Denzel Whitaker.

Killer Elite (R for profanity, sexuality, nudity and graphic violence) Jason Statham stars in this cat-and-mouse caper based on the case of a special-ops agent who came out of retirement to rescue his mentor (Robert De Niro) caught in the clutches of an Arab oil sheik (Rodney Afif) with an army of assassins. Cast includes Clive Owen, Dominic Puircell and Yvonne Strahovski.

A Bird of the Air (Unrated) Romance drama about a freewheeling librarian (Rachel Nichols) who helps an uptight loner (Jackson Hurst) locate the owner of the loquacious parrot that flew into his trailer home. With Buck Henry, Judith Ivey, Linda Emond and Anjanette Comer.

Machine Gun Preacher (R for sexuality, profanity, violence, disturbing images and drug use) Redemption drama chronicling the real-life exploits of a recently-paroled biker (Gerard Butler) who ventured with his wife (Michelle Monaghan) to war-torn Sudan in order to rescue hundreds of kidnapped orphans after becoming a crusader for Christ. With Michael Shannon, Kathy Baker and Madeline Carroll.

There Was Once… (Unrated) Tolerance-themed documentary about a Hungarian high school teacher who recently decided to create a memorial for members of the local Jewish community totally wiped out during the Holocaust. (In Hungarian with subtitles)

Thunder Soul (PG for smoking and mild epithets) Musical documentary chronicling the 35th reunion of members of Houston's history-making, Kashmere High School Band with 92 year-old Conrad "Prof" Johnson, the legendary coach who led the ensemble of African-American, inner-city kids to a number of championship titles in nationwide competitions during the Seventies.

Weekend (Unrated) Out-of-the-closet drama about a straight guy (Tom Cullen) who picks up a man (Chris New) at a gay club for what was supposed to be just a drunken, one-night stand only to have the homoerotic encounter blossom into a full-blown love affair.

The Whale (G) Orca documentary, narrated by Ryan Reynolds, revolving around the exploits of Luna, a young killer whale who befriended residents of Vancouver Island after becoming separated from his family.