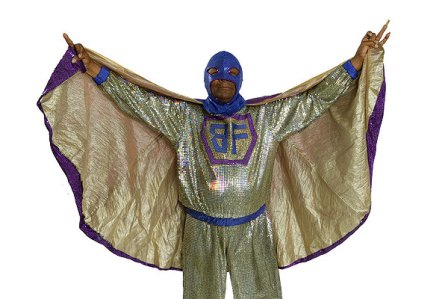 Clarence Reid is a legendary songwriter who wrote R&B hits back in the Sixties and Seventies for everyone from Sam & Dave to KC & the Sunshine Band. What many people don't know, however, is that he also donned a flamboyant costume, periodically, to perform raunchy rap tunes as his irreverent alter ego, Blowfly.

Although well past retirement age, Clarence still tours the country as Blowfly, and he is being well-received by young audiences which appreciate his critical influence on the Hip-Hop Generation. Those debatable cultural contributions are the subject of The Weird World of Blowfly, an aptly titled documentary directed by Jonathan Furmanski, with an emphasis on the word 'weird.".

What makes the film fascinating is the fact that several rap pioneers like Chuck D. and Ice T. make appearances to pay tribute to their degenerate mentor, thereby confirming that what otherwise appears to be just a dirty old man in a mask is telling the truth when he claims "I invented rap." For example, Chuck D. states that "Rapp Dirty" served as the inspiration for the Public Enemy anthem "Fight the Power." Who knew?

Cringe-inducing debauchery courtesy of The Godfather of Rap!

See a trailer for The Weird World of Blowfly