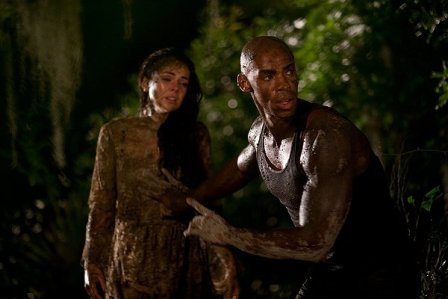 Creature (Unrated) Cajun Country horror flick, pictured above, about an ex-Navy Seal (Mehcad Brooks) who vacations with a group of friends in a backwoods region of Louisiana in the face of local folklore about a fabled swamp monster that's half-man and half-alligator. Ensemble includes Sid Haig, Dillon Casey and Serinda Swan.

Inside Out (PG-13 for violence and profanity) Crime drama about a recently-paroled ex-con (Triple H) forced to protect his best friend's (Michael Rapaport) family from a crime boss (Bruce Dern) bent on revenge for an accidental shooting. With Parker Posey, Julie White, Michael Cudlitz and Jency Griffin

Warrior (PG-13 for profanity, mature themes and intense fight sequences) Sibling rivalry saga about an ex-Marine (Tom Hardy) haunted by a tragic past who returns home to be trained by his retired boxer father (Nick Nolte) for a big showdown with his estranged brother (Joel Edgerton) in a mixed martial arts tournament. With Noah Emmerich, Denzel Whitaker and Kevin Dunn.

Echotone (Unrated) Cultural portrait of Austin, Texas as painted by members of the city's creative class, struggling musicians balancing artistic integrity against the idea of making concessions to the demands of commercialism.

Mere Brother Ki Dulhan ( Unrated) Bollywood romantic comedy about a bachelor (Imran Khan) who arranges a marriage for his brother (Ali Zafar) living in London only to find himself falling in love with the free-spirited bride-to-be (Katrina Kaif). With Tara D'Souza, Kanwaljit Singh and John Abraham. (In Hindi and English with subtitles)

Shaolin (R for violence) Martial arts action flick about a Chinese warlord (Andy Lau) who temporarily becomes a monk to atone for his sins before returning to a life of violence to avenge the murder of his entire family by a rival gang. Cast includes Nicholas Tse, Bingbing Fan, Bing Bai and Jackie Chan. (In Mandarin and Cantonese with subtitles)

We Were Here (Unrated) AIDS retrospective taking a long look back at the impact of the epidemic on the gay community in San Francisco where the disease claimed the lives of over 15,000 people in the early Eighties. With appearances by Paul Boneberg, Ed Wolf and Eileen Glutzer.

Where the Soldiers Come From (Unrated) "God, mom and apple pie" documentary about five childhood friends from Michigan's Upper Peninsula who volunteered to serve in Afghanistan.