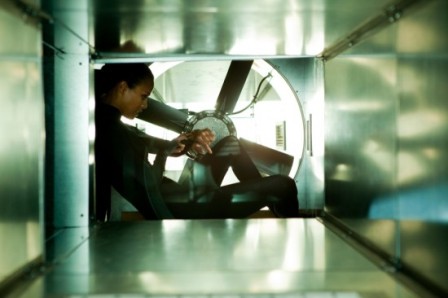 Columbiana (PG-13 for violence, sexuality, intense action sequences, disturbing images and brief profanity) Revenge thriller, set in Bogota, Colombia, about a young girl (Zoe Saldana) who grows up to be a cold-blooded assassin after witnessing the murder of her parents. With Michael Vartan, Cliff Curtis and Callum Blue.

Don't Be Afraid of the Dark (R for violence and terror) Remake of the 1973 made-for-TV horror flick about a 10 year-old girl (Bailee Madison) abandoned by her mother who moves in with her father (Guy Pearce) and his new girlfriend (Katie Holmes) only to discover that the spooky Gothic mansion they're renovating is haunted by creepy creatures. Supporting cast includes Jack Thompson, Edwina Ritchard and Garry McDonald.

Our Idiot Brother (R for nudity, sexuality and pervasive profanity) Paul Rudd stars as the title character of this stoner comedy about an idealistic ex-con's effort to readjust to civilian life with the help of his three sisters (Emily Mortimer, Zooey Deschanel and Elizabeth Banks) after serving time in prison for selling pot. With Rashida Jones, Adam Scott and Steve Coogan.

Circumstance (R for sexuality, profanity and drug use) Iranian coming-of-age drama, set in present-day Teheran, revolving around the sexual awakenings  of a rebellious, 16 year-old lesbian (Nikohl Boosheri) over the objections of her disapproving parents (Soheil Parsa and Nasrin Pakkho) and her uptight, orthodox Muslim brother (Rezo Sixo Safal). With Sarah Kazemy, Sina Amedson and Keon Mohajeri. (In Persian with subtitles)

Higher Ground (Unrated) Vera Farmiga makes her directorial debut and stars in this adaptation of The Dark World, Carolyn Briggs' memoir about a Born Again Christian who comes to question her faith while living in a tight-knit, evangelical community. With Donna Murphy, John Hawkes and Bill Irwin.

Iron Crows (Unrated) Eco-documentary chronicling the dangerous work of the 20,000 peasants who risk their lives daily to earn $2 a day scavenging ships from all over the world being dumped in a toxic naval graveyard located in the port city of Chittagong.

Swinging with the Finkels (Unrated) Midlife crisis comedy about a married couple (Mandy Moore and Martin Freeman) who decide to spice up their listless love life by swapping partners with their best friends (Melissa George and Jonathan Silverman) whose relationship is also in crisis. With Jerry Stiller, Elizabeth Tan and Graham Bohea.