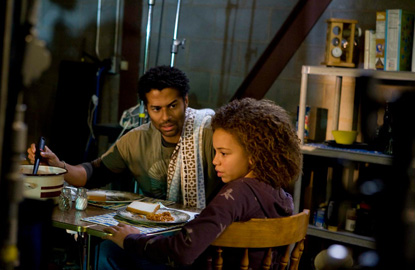 "Trinity Goodheart" (Erica Gluck) is inconsolable from the moment her mother (Kellin Watson) vanishes into thin air through the fateful day she finds half of a heart-shaped pendant lying on her bed. Convincing herself that the precious keepsake was delivered by a guardian angel on behalf of her long-lost mother, the desperate 12 year-old seizes on the discovery as a promising sign of a possible impending reunion. After all, the saying inscribed on the back of the torn locket prophesies, "Every broken heart longs to be whole again."

Such wistful thinking is understandable given how immature her father, Jeremy (Eric Benet), has been behaving lately. The aspiring musician has barely been able to keep a roof over their heads since quitting his steady job at a bank. Consequently, he's currently been reduced to playing his saxophone for tips on the streets of Boston.

The stressful situation has taken a toll on Trinity's performance at school where the once straight-A student finds herself at risk of suspension because of a declining attendance record. The problem is that the precocious adolescent is smart enough to understand that she and her panhandling dad urgently need someone to lean on, despite the fact that he is too proud to approach his attorney parents for help.

They consider Jeremy the black sheep of the family since he failed to follow in their footsteps by attending law school like his brother did. Meanwhile, Jeremy is even more estranged from his well-to-do in-laws, The Hawthornes, who never gave him a chance just because they didn't like the idea of a black man marrying their white daughter. Sadly, they even continued to refuse to reconcile after the birth of their only grandchild.

Over her father's objections, Trinity secretly tracks down both sets of her grandparents on her own, reasonably expecting them to let bygones be bygones, if only for the sake of solving the mystery of her missing mother. However, when her surprisingly surfacing only stirs up old controversies, she decides to run away from home out of frustration, hitchhiking from Beantown to Buffalo, the place she suspects holds the key to her missing mom's disappearance.

Thus unfolds Trinity Goodheart, a wholesome family flick based on a script by Rhonda Baraka. Though shot on a shoestring budget, Joanne Hock makes an impressive directorial debut with this modern morality play with an uplifting, if bittersweet message about forgiveness and the importance of family.

Much of the credit for the movie's success must be attributed to the chemistry generated between its talented co-stars, Erica Gluck and Eric Benet, given that the story primarily revolves around their characters' dysfunctional father-daughter relationship. Though an original production by the Gospel Music Channel Network, the film only hints at a faith-based agenda via light touches such as Trinity's name and lines like, "Don't forget to say your prayers."

A present-day parable delivering a powerful reminder that much wisdom often still comes from the mouths of babes.

See a trailer for Trinity Goodheart