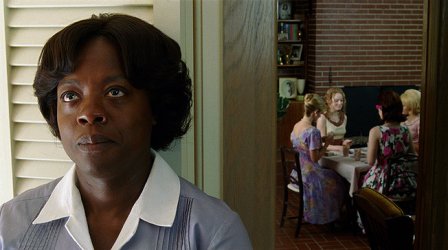 Kathryn Stockett made an auspicious debut in 2009 with the publication of "The Help," a poignant period piece examining the unquestioned relationships of entitled, white socialites and their deferential black maids in Mississippi. Although the story is set in the author's hometown of Jackson in the early 60s, her best-selling novel is more fictional than autobiographical in nature.

The screen adaptation unfolds from the point of view of Aibileen Clark (Viola Davis), a long-suffering nanny left bone-weary by a life spent "lookin' after white babies." Born in 1911, she is currently raising little Mae Mobley Leefolt (Emma and Eleanor Henry), a recent addition to a prominent Southern family.

As narrator, Aibileen is able to admit to the audience the existence of a "bitter seed" planted deep inside of her soul since the recent death of her only son. Still, she is not one to risk her job by allowing her face to reveal even a trace of that resentment in the presence of her employers. Instead, the grammatically-challenged domestic dutifully nourishes the impressionable toddler in her care by regularly reciting the same spiritual mantra she's shared with all 17 other children entrusted to her over the years, namely, "You is kind; you is smart; you is important."

By contrast, Aibileen's relatively-mercurial best friend, Minny (Octavia Spencer), is not nearly as stoic, which explains why she frequently finds herself fired for insubordination. After all, the strictly-enforced housekeeper code of conduct calling for no spanking, touching or sassing white folks, and especially no using their bathrooms tends to test her patience.

Passive-aggressive Minny is lucky even to be alive after her latest outburst which led to her being dismissed by Hilly Holbrook (Bryce Dallas Howard), an insufferable shrew who only got what she deserved. Minny next lands a position with Celia Foote (Jessica Chastain), a newcomer ostracized by other well-to-do ladies because of her white trash roots.

The plot thickens, upon the arrival back in town of cotton plantation heiress Skeeter Phelan (Emma Stone). Having spent time away from the racist region, the aspiring journalist now finds herself offended by a way of life everyone else around her seems to take for granted.

Feeling for the plight of the long-suffering black servants who had raised her and her friends so lovingly despite the discrimination, Skeeter decides to write a book recounting what life in Jackson is like from their perspective. So, starting with Aibileen and Minny, she starts approaching sisters to cooperate with the project, which is no mean feat, given that this is Mississippi at a time when it was often fatal to challenge the status quo.

Truth and reconciliation belatedly achieved, like a dream deferred.

See a trailer for The Help