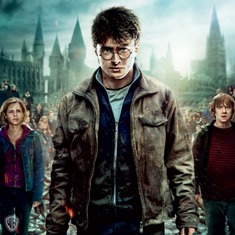 Over the past decade, the Harry Potter screen adaptations have proven to be just as popular as the best-selling series of children's books upon which they're based. The first seven grossed over $6 billion at the box-office, making it the most lucrative film franchise of all time even before the release of this worthy finale.  The Skanner News Video: Trailer and premiere

Unless author J.K. Rowling decides to extend the spellbinding saga, which isn't entirely out of the question, Harry Potter and the Deathly Hallows: Part 2 is slated to bring down the curtain on the magical adventures of the boy wizard and his Hogwarts School classmates. Directed by David Yates (HP 5, 6 & 7), this installment picks up right where the last one left off, namely, with Harry (Daniel Radcliffe) and his pals Ron (Rupert Grint) and Hermione (Emma Watson) resuming their quest to find the rest of Dark Lord Voldemort's (Ralph Fiennes). "Horcruxes."

Diehard Potterheads undoubtedly already know why gaining possession of the wizard weaponry known as the "Deathly Hallows" (the Resurrection Stone, the Elder Wand and the Cloak of Invisibility) is so critical to the success of the seek-and-destroy mission to vanquish the merciless Voldemort. Nonetheless, uninitiated "muggles" like yours truly need not be familiar with the inscrutable lexicon to appreciate the fact that what's about to unfold is a classic showdown between the forces of good and evil over the very fate of the world.

As for special effects, this is the first HP episode shot in 3-D, which turns out to be worth the investment given the profusion of captivating action sequences ranging from the heroes' daring escape from a subterranean inferno on the back of a fire-breathing dragon to an epic, high body-count battle on the campus of their alma mater.

Once the dust settles, however, what's ultimately more memorable than the climactic clash of the wands is the update by way of postscript relating intimate details of developments in the protagonists' personal lives. After all, they're almost like family after maturing in front of our very eyes since they were adolescents, so it's only natural that we'd like to know how they turned out as adults.

A fitting capstone on a fabled film franchise for the ages!