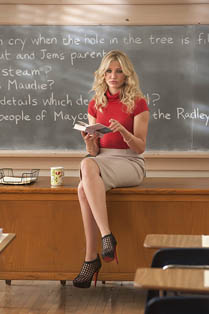 Public schoolteachers have been getting a pretty bad rap recently, between taking the brunt of the blame for both the declining graduation rates and the escalating deficit of many a state's economy. Promising to tarnish the noble profession's reputation even further is this lowbrow comedy revolving around a shameless gold digger too obsessed with landing a sugar daddy to worry about the welfare of her 7th grade students.

Elizabeth Halsey (Cameron Diaz) is a foul-mouthed, pot-smoking alcoholic who lets her class at John Adams Middle School (JAMS) watch movies every morning so she can close her eyes while her hangover wears off. At the point of departure, we find the self-abusing schoolmarm singularly focused on her impending wedding to the filthy-rich heir (Nat Faxon) she sees only as her meal ticket to a pampered life in the lap of luxury.

After all, she's already gotten the gullible guy to give her a Mercedes convertible as well as access to his credit card. However, he wises up and calls off the wedding when informed by his mom (Stephanie Faracy) that his conniving fiancée has maxed out that account.

Consequently, Elizabeth rather reluctantly returns to JAMS in the fall, with finding another well-heeled, prospective hubby at the top of her agenda. Sure, the affable gym teacher, Russell Gettis (Jason Segel), starts flirting with her again, but he doesn't have nearly enough money to hold her interest.

As it turns out, there is a new substitute teacher, Scott Delacorte (Jason Timberlake), who fits the bill quite nicely. However, Elizabeth immediately encounters some stiff competition for his affection from Amy Squirrell (Lucy Punch), and soon decides that breast implants might turn the tide in her favor. And because there's a $5,000 bonus in store for the teacher whose class performs the best on the big standardized test at the end of the semester, Elizabeth is highly motivated for the first time to help her students maximize their test scores.

So unfolds Bad Teacher, a decidedly-adult romp directed by Jake Kasdan (Walk Hard). Don't be deceived by the movie's premise which probably sounds a lot more like a set-up for a classic love triangle than a titillating teensploit. Be forewarned, this Cameron Diaz vehicle seizes on any excuse to serve up crude fare whether by having the heroine engage in relentlessly-vulgar repartee or merely prance around suggestively scantily clad.

Provided you're in the mood for such salacious fare, Bad Teacher does deliver the requisite number of raunchy rib ticklers to be worth the investment for the testosterone-driven demographic.

Rated R for nudity, profanity, sexuality and drug use.

To see a trailer for Bad Teacher, visit: