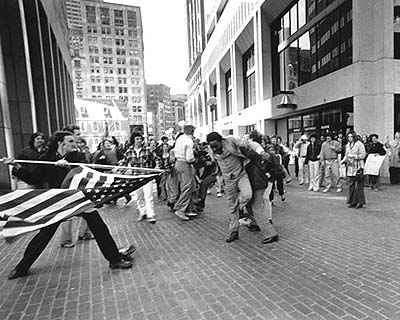 "The Soiling of Old Glory," by Stanley Forman, a Pulitzer-Prize winning photo depicting a Boston protest over busing in 1976

BOSTON (AP) -- A white teen is photographed as he prepares to attack a black man with an American flag during a school busing protest at Boston City Hall Plaza. TV news stations broadcast riot police patrolling white neighborhoods as angry protesters attack school buses with rocks. Black leaders call on all minorities to avoid visiting Boston at all costs.

The images of Boston busing riots in the 1970s have become iconic and a lasting stain on the city's history. But a Boston advocacy group says they're only part of the story.

A documentary that's to be unveiled this week is the start of a project that aims to show that the busing riots that roiled Boston were more than just a conflict between blacks and whites. The documentary, entitled "Can We Talk?", seeks to show that activists who wanted equal education helped bring about the court order on busing, which led to the protests. It also shows how the riots that followed affected the children being bused.

The Union of Minority Neighborhoods, a Boston advocacy group, is scheduled to show the documentary Tuesday at the Boston Public Library as part of its launch of its years-long Boston Busing/Desegregation Project. Other plans for the project include a series of events with the children who were bused and their parents, community meetings around the city to talk about the legacy of the riots and how that conflict lingers in the present-day Boston school system, and eventually the creation of an independent Truth and Reconciliation Commission consisting of community members and civic leaders.

The planned commission is an attempt to "heal those hurt" by the riots, said the project's coordinator, Donna Bivens.

"It was a very embarrassing time for Boston, and for some people, it still lingers," said Bivens. "But we rarely discuss it and most of us don't know the history behind it. The film is a start of this long-overdue conversation."

The hour-long documentary pulls together voices from Sept. 12, 1974, the first day of school in Boston under the court-ordered plan that took children from segregated neighborhoods and bused them to others. Those interviewed, white and black, talk about the racial remarks they endured and horrific protests they encountered.

Bivens said the film will also show how the crisis stemmed from the desire for equal access to education and was not simply another episode of racial strife. "That part always gets neglected," she said.

The idea for the project came after the Union of Minority Neighborhoods attempted to organize black parents to better interact with officials at Boston Public Schools. But members of the group found that many black parents had anger and distrust toward the school system, said the group's executive director, Horace Small.

"There was a lot of anger and it was coming from somewhere deep," said Small. "When we started digging a little deeper, we recognized it."

Jacqui Lindsay, a consultant for the project, said the project could also shed light on current issues within the Boston Public Schools, like equity and resources.

Boston schools rarely discuss the riots with students and usually act as if they didn't happen, said Paul Watanabe, a political science professor at UMass-Boston who is not associated with the project. He called the project a good idea.

"To say it would open up old wounds is based on the false assumption that the old wounds were healed. They weren't," said Watanabe. "But I think now we have the ability to deal with those wounds."


Bivens said the project also would give residents a chance to discover facts they didn't know about the busing riots. For example, rarely discussed by historians and the media are the effects the riots had on Latino and Asian-American families.

"We have so much ground to cover," said Bivens. "We're just getting started ... finally."