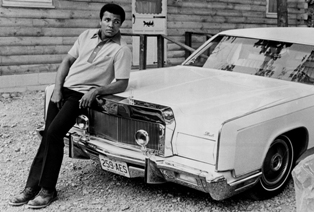 In 1966, Muhammad Ali refused to report to an Army induction center when he was drafted to fight in Vietnam, explaining: "I ain't got no quarrel with them Viet Cong. They ain't never called me [N-word]." At the time, he was undefeated and the undisputed Heavyweight Champion of the World.

However, Muhammad was soon arrested and convicted of draft evasion, and subsequently stripped of his title and boxing license. And he was unable to fight again for over four years, until his conviction was finally overturned by the U.S. Supreme Court.

Muhammad's arduous path to regaining the heavyweight crown culminated with the classic, 1974 fight in The Congo against George Foreman forever remembered as The Rumble in the Jungle. What makes "Muhammad Ali: The Long-Lost Movie" so fascinating is the fact that it was shot in 1973 and 1974 when he was close to completing his amazing comeback to champ against what were considered the longest of odds. After all, Foreman was then considered unbeatable, given how he had just knocked Joe Frazier down six times in four minutes in a two-round contest.

Directed by Anton Perich, the film was shot entirely on location at Muhammad's mountaintop camp located in rustic Deerlake, Pennsylvania.

The director was afforded free access to shoot Ali in the gym where he is seen both sparring in the ring and working out with his legendary corner men Drew "Bundini" Brown and Angelo Dundee.

More interesting are the tete-a-tetes with Muhammad during downtime, when he is heard musing about everything from his faith to his training regimen to racism to the Hurricane Carter case. He even confidently predicts that he will prevail in the impending showdown in Zaire, asserting, "Foreman don't hit hard. He's awkward. He can't go five rounds. It's going to be a shock to the world."

However, he does concede that "There ain't but one thing can stop me from winning the fight." But you'll have to see the movie to find out his very surprising vulnerability.

Ever the philosopher, Ali reveals a very deep side of himself during moments of reflection. Here's a sampling of his many quips shared. "A man's wealth is in his knowledge, not in the bank." "A worldly loss often turns into a spiritual gain, and vice-versa." And "The lover of nature is the true worshipper of God."

Vintage intimate footage of The Greatest on the verge of what would prove to be his greatest moment in the ring.