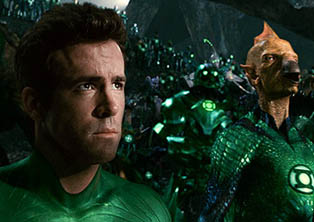 When you think of Ryan Reynolds, what mostly comes to mind are his wacky romantic romps like The Proposal, Van Wilder, Adventureland and Definitely, Maybe. Comedy chops aside, one still might naturally wonder whether he would able to summon sufficient gravitas when asked to portray a comic book superhero.

Diehard Reynolds fans undoubtedly remember that he's previously played a caped crusader, Captain Excellent, in Paper Man, as well as a villain, Deadpool, in Wolverine. Obviously all of the above left him well-prepared to assume the lead in Green Lantern, where he rises to the occasion with perfect aplomb.

Directed by Martin Campbell (Casino Royale), this classic origins adventure is designed to function as a detailed introduction to both the title character and his alter ego, Hal Jordan. At the point of departure we find ladies man Hal leaving late for his job as a test pilot for Ferris Aircraft. He bids the woman he's just shared a one-night stand with farewell by saying, "Make yourself at home. There's water in the tap." What a charmer.

After a training exercise goes terribly wrong at work, slacker Hal finds himself unfavorably compared, as usual, to his colleague/love interest, Carol Ferris (Blake Lively). However, his ineptitude doesn't discourage a dying alien (Temeura Morrison) from a world away who crash lands on Earth from picking him as the first human to ever be inducted in the Green Lantern Corps.

Hal is summarily whisked away to the planet Oa where he is given an appropriately-verdant stretchy outfit and a matching mask before being whipped into fighting shape by a burly beast named Kilowog (Michael Clarke Duncan). He learns that when he's incarnated as the Green Lantern, he can turn whatever he thinks into reality by sheer force of will.

Aimed at the 'tweener demo, the picture's simplistically-scripted storyline pits good versus evil as embodied by the Guardians of the Universe (the Green Lantern Corps) and a pair of diabolical antagonists in Parallax (Clancy Brown) on Oa, and Dr. Hector Hammond (Peter Sarsgaard) down on this planet.

To see a trailer for Green Lantern, visit: