Bad Teacher (R for nudity, profanity, sexuality and drug use) Cameron Diaz stars in the title role of this romantic comedy about a trashy gold digger who schemes to land a wealthy substitute teacher (Justin Timberlake) while being chased by another colleague (Jason Segel). With Lucy Punch, Molly Shannon and Thomas Lennon. 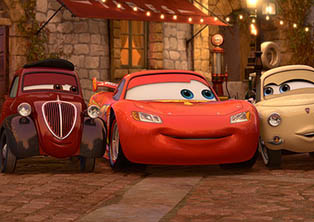 The Best and the Brightest (Unrated) Social climber comedy about a desperate couple (Neil Patrick Harris and Bonnie Somerville), new to Manhattan, who enlist the assistance of an education consultant (Amy Sedaris) in order to get their 5 year-old daughter (Amelia Talbot) admitted to an exclusive private school. With John Hodgman, Christopher McDonald and Kate Mulgrew.

A Better Life (PG-13 for profanity, violence and drug use) American Dream drama, set in East L.A., about an undocumented immigrant's (Demian Bichir) attempt to protect his teenage son (Jose Julian) from both street gangs and deportation back to Mexico. With Joaquin Cosio, Nancy Lenehan and Bobby Soto.

Conan O'Brien Can't Stop (Unrated) Concert flick featuring the late night talk show host over the course of a 44-city, standup comedy tour during a period in 2010 when he found himself between networks. With appearances by Jim Carrey, Jon Stewart, Stephen Colbert and Conan's longtime sidekick Andy Richter.

General Orders No. 9 (Unrated) Cinematic portrait of the State of Georgia shot by first-time director Robert Persons who laments the escalating encroachment of urbanization on the South's natural habitats.

If a Tree Falls (Unrated) Eco-documentary chronicling the exploits of the Earth Liberation Front, the revolutionary environmental group named by the FBI as America's #1 domestic terrorist threat.

Leap Year (Unrated) Sadomasochistic drama, set in Mexico City, revolving around a suicidal freelance journalist (Monica del Carmen) who enlists the help of a stranger (Gustavo Sanchez Parra) with whom she shares a one-night stand. (In Spanish with subtitles)

A Little Help (R for sexuality, profanity and drug use) Bittersweet dramedy about a dental hygienist (Jenna Fischer) who suddenly finds herself resorting to lies to provide for herself and her 12 year-old son (Daniel Yelsky) in the wake of her philandering husband's (Chris O'Donnell) untimely death. With Kim Coates, Ron Leibman, Lesley Ann Warren and Rob Benedict.

A Love Affair of Sorts (Unrated) Serendipitous love tale, unfolding in Los Angeles during the holiday season, between a surreptitious painter (David Guy Levy) and the Hungarian nanny (Lili Bordan) he catches shoplifting at a bookstore on his cell phone camera. Support cast includes Ivan Kamaras and Jonathan Beckerman.

The Names of Love (Unrated) French farce about a free-spirited, young political activist (Sara Forestier) who succeeds in converting right-wing conservatives to her liberal cause by sleeping with them until she meets her match in a stubborn, middle-aged Fascist (Jacques Gamblin). With Carole Franck, Jacques Boudet and former Prime Minister of France Lionel Jospin. (In French, Greek, Arabic and English with subtitles)

Passione (Unrated) John Turturro directed and narrates this labor of love exploring the musical and cultural contributions of the City of Naples. (In Italian, Neapolitan, Arabic and English with subtitles)

Raw Faith (Unrated) Slice-of-life bio-pic capturing Minister Marilyn Sewell's personal struggle with the question of whether or not to leave the pulpit after she falls in love for the first time.

Turtle: The Incredible Journey (G) Nature documentary traces the path a little loggerhead turtle takes from Florida to the frozen North Atlantic to Africa and back to the beach where she was born.

Vincent Wants to Sea(Unrated) Road flick about a man with Tourette's Syndrome (Florian David Fitz) who runs away to Italy from a Bavarian rehabilitation center accompanied by his obsessive-compulsive roommate (Johannes Allmayer) and an anorexic patient (Karoline Herfurth) in order to fulfill his late mother's last request. (In German with subtitles)