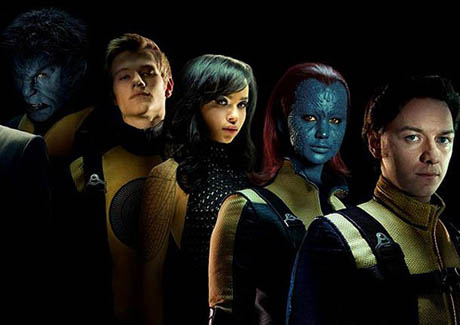 The release of a prequel is normally a sign that a franchise is running out of steam. But that isn't the case with X-Men: First Class, a very worthy extension of the Marvel Comics franchise. This classic "origins" episode is devoted to the derivation of Charles Xavier (James McAvoy) and Erik Lehnsherr's (Michael Fassbender) superpowers and to these archenemies' emergence as Professor X and Magneto, respectively.

The film opens during World War II inside a concentration camp where we find Erik, a suspected mutant, being pressured at gunpoint by a Nazi scientist (Kevin Bacon) to demonstrate his ability to move a coin with no hands. When he fails to comply, the sadistic Dr. Shaw callously shoots the boy's mother to death right on the spot.

Enraged, Erik is suddenly able to summon his superhuman magnetizing skills to kill a couple of guards but the perpetrator manages to escape. Understandably, the trauma of witnessing the murder leaves the kid obsessed with exacting vengeance on the perpetrator.

At the same time of Erik's internment, Charles is growing up in New York City with a silver spoon in his mouth. There, the orphaned, 10 year-old heir to a family fortune has been learning how to harness his own special gift, namely, mental telepathy.

Fast-forward a couple of decades and Erik is still trying to track down Dr. Shaw on a trail which is taking him from Switzerland to Argentina to Miami. Meanwhile, Charles is just returning to the States after earning a Ph.D. at Oxford where he majored in Mutantology.

Their paths intersect soon after the CIA seeks Dr. Xavier's advice about assembling a top secret team of genetic anomalies to neutralize the efforts of an evil counterpart bent on world domination, who is none other than the diabolical Dr. Shaw. This initially makes pacifist Professor X and revenge-minded Magneto easy allies, until the former's peaceful nature comes in conflict with the latter's personal agenda.

Unfolding against the backdrop of the Cuban Missile Crisis, X-Men: First Class takes considerable cinematic license with the truth, though very cleverly weaving myriad Marvel characters into factual events in a most entertaining fashion. The upshot is a fanciful, revisionist history suggesting that mutants might have played a pivotal role in the resolution of an infamous Cold War incident.

In this regard, the film is reminiscent of Inglourious Basterds, a Quentin Tarantino tour de force which had Hitler assassinated by an interracial couple in a movie theater instead of committing suicide in his underground bunker. What's next? How about a flick where the D-Day assault on the beach at Normandy is led by the Teenage Mutant Ninja Turtles. I probably shouldn't be giving Hollywood these ideas for free.

In English, French and German with subtitles.

To see a trailer for X-Men: First Class, visit The Skanner's YouTube Channel