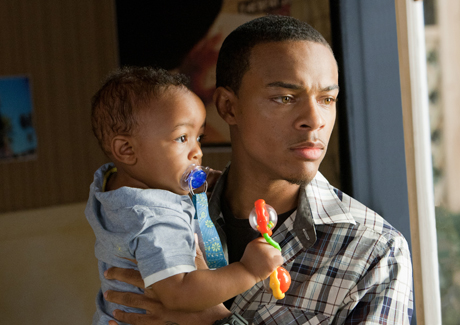 Bow Wow is the "Youngest Solo Rapper to Ever Hit No. 1," as recognized by the Guinness World Records. All told, he's sold more than 10 million CDs and 14 million digital assets to date.

Kam Williams: How you been, Bow Wow?

KW:The last time we spoke, you had all your fans interacting with you on Skype at the same time I was interviewing you about Lottery Ticket.

BW: Yeah, man, that was crazy. I remember it like it was yesterday. We're right back at it now.

BW: What interested me was the opportunity to work with Tyler [Perry], which had always been an objective of mine because of his being a top Hollywood director. I remember walking up to him at a Janet Jackson concert and going like, "Yo, man, you gotta put me in one of your movies," as if he'd be crazy if he didn't. I thought he'd probably forget, because I have people come up to me trying to talk business all the time, but I guess he kept me in mind. It was like a blessing from God when I heard he wanted me to play Byron.

KW: Editor/Legist Patricia Turnier asks:What was it like working with Tyler Perry?

BW: It was dope! I had a lot of fun working with him. He's a hard worker. And he works extremely fast, which is how I like to operate, because he comes to the set knowing what shots he wants to get. He's very professional and doesn't waste any time. I definitely can't wait to do another Tyler Perry movie, especially since I liked the moral of the story.

KW: What would you say is the movie's message?

BW: That tomorrow is never promised and that family is very important. So, make sure you tell your family you love them each and every day because you don't know when it might be your last opportunity.

BW: Most definitely. He does a terrific job with those dramatic moments. I think it comes from his own life experiences and from making it after everything he had to overcome.

KW: How was it acting opposite Lauren London who played your girlfriend, Renee, and working with the rest of the ensemble?

BW: I've known Lauren for a while, I had just worked with Loretta Devine on Lottery Ticket, and I'd worked with the majority of the cast before, so it was really comfortable for me on set.

KW: Larry Greenberg says: Tyler Perry plays so many parts in this film. Were you worried that he was going to take your role?

BW: [LOL] No, I wasn't worried about that at all. [Laughs some more]

KW: Brian Stimson says: I'd like to know whether you faced any difficulties making the transition from childhood to adulthood. Most of us not in the spotlight can easily shed those childhood personas, but I wonder if it's the same for someone who is both a music and film star?

BW: I always say, "It's all about the work." That's one thing I've done. I've just committed to my work, which I think is what has enabled me to make it over that hurdle that a lot of other child stars don't. You can become greater than what you already are. That's what I'm always about.

BW: Dramatically! In music, everything's digital now. But I think change is normal. There's always a natural progression. Even in Hollywood, where you see many more independent films being shot.

KW: Irene also asks: What achievement in your career makes you proudest?

BW: I'm too young to say at this point in my career. I have way too much more to accomplish.

KW: Irene's last question: Acting or rapping, which is your preference?

KW:Harriet Pakula Teweles says: When you got older, you removed the 'Lil' from your name. As you age and mature, might you shorten it again?

BW: No, I think if I ever changed my stage name again, I'd just start using my real name, Shad.

BW: That's crazy! [Chuckles] Yeah, one question people rarely ask me is whether I'm happy doing what I do?

KW:Okay, are you happy doing what you do?

BW: Honestly? Sometimes. When it comes to movies, I love it. No complaints. But with music, I'm only happy 75 percent of the time because there's a lot of nonsense you have to deal with in the industry, although I still give it 110 percent. It's a constant struggle for artists in the music industry.

KW: Do you ever wish you could have your anonymity back?

BW: In my eyes, I feel like I'm still a regular dude. For instance, I went to the movies last night. I can go to the busiest places and not get noticed, even in Manhattan.

KW: Well, thanks again Bow Wow, and I look forward to speaking to you about your next project?

To see a trailer for "Madea's Big Happy Family," visit: