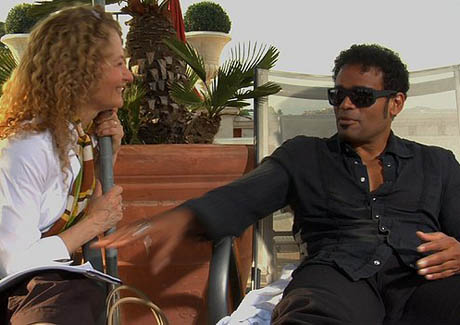 After 25 years of incessant mental abuse, housewife Naomi Holbroke (Bonnie Loren) has finally had it up to here with beingberated by her insufferable husband (Richard Franklin). Not only does the British bureaucrat continually complain about her cooking, but he's never appreciated the fact that she abandoned her dream of becoming an actress when she married him and moved to England.

Naomi handles her midlife crisis by leaving the creep for the Cannes Film Festival where she attempts to kickstart her career by auditioning for the lead in a film just being cast by Billy Rust (Mario Van Peebles), a one-hit wonder who's trying to revitalize his own after a long dry spell. Trouble is the role calls for a voluptuous, young ingénue, not a flat-chested cougar who's looking a little long in the tooth.

Not one to be discouraged easily, Naomi nonetheless persuades Billy to take her up to his hotel room and tie her to a chair as called for by the script's sadomasochistic theme because "It's every woman's fantasy!" (Who knew?) Unfortunately, instead of finding her performance the least bit provocative, blasé Billy merely drifts off into a very deep sleep. Humiliated, Naomi lets herself out somehow still bound, and she subsequently shows up in the States several days later to stalk the director for another screen test.

That is the intriguing enough point of departure of Tied to a Chair, a screwball comedy written and directed by Michael Bergmann. Despite a truth in advertising title which does the best job of living up to its billing since Snakes on a Plane, the picture turns out to be a tad too screwy for its own good.

For, once New York native Naomi arrives in the Big Apple, the movie morphs dramatically from the improbable to the preposterous, starting with Billy's decapitation. Soon, she's implicated in the crime, and it's not long before she's commandeering a cab and careening around town and running a gauntlet comprised of cops, mobsters and radical Islamists.

Shot between 2007 and 2009, the film feels even more dated than that due to its featuring cartoonish suicide bombers hatching a cockamamie terrorist plot, caricatures which maybe might have worked immediately in the wake of the 9/11 attacks. Regardless, the rapid disintegration of Tied to a Chair's promising plot into nonsense looks like Michael Bergmann might have merely quit directing midway through the movie after having established a compelling premise.

He must have forgotten to include a screenplay in the flick's budget.

To see a trailer for Tied to a Chair, visit The Skanner News' YouTube Channel