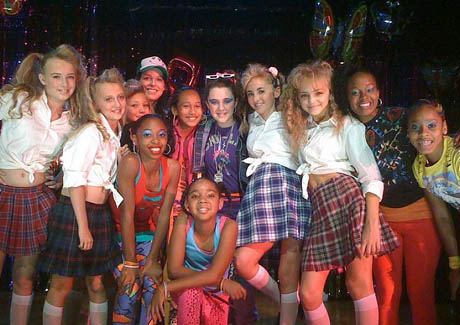 In some ways, 14 year-old Spork (Savannah Stehlin) is your typical adolescent trying to negotiate her way through those awkward years. Her being frizzy-haired, overweight and hailing from the wrong side of the tracks makes her easy prey for CherryLane Middle School's exclusive clique of popular blondes led by the insufferable Betsy Byotch (Rachel G. Fox).

But Spork has considerable additional burdens to bear, being an orphan whose mother died after her father abandoned the family. Since then, she's been raised in a trailer park by her big brother, Spit (Rodney Eastman). He's the one who came up with her sibilant nickname inspired by that infernal hybrid of a spoon and a fork, due to the fact that she has both male and female sex organs.

Spit's publicly outing his sister as a hermaphrodite has only added to her sense of social isolation, as her tormentors have taken to referring to her as everything from "Fagatron" to a "He-She." Consequently, Spork now hangs with the African-American crowd, basically because of the support of her best friend, Tootsie Roll (Sydney Park). And even though she has no rhythm, with the Black kids' blessing, encouragement and coaching, she decides to enter her school's Annual Dance-Off Competition.

That, in a nutshell, sets up the eventual big showdown around which Spork revolves, as quirky a coming-of-age comedy as you are ever apt to encounter. Written and directed by J.B. Ghuman, Jr., the picture might be best thought of as a cross of Kick-Ass and Napoleon Dynamite; or better yet as Mean Girls meets The Revenge of the Nerds.

It's admittedly fun to root for such an abject underdog, although while watching this screwball adventure, I couldn't help but wonder whether students in junior high are really quite as precocious nowadays as these sexually-active characters. Fair warning: some of the ethnic humor is of questionable taste, like when the white dance team performs in blackface or when a fat Chinese kid is called a "Chunk," ostensibly a slur emanating from a blend of "Chink" and "chunky."

Spoiler alert: Spork not only ultimately prevails, but she even manages to win the heart of a cute and sensitive, gender-ambiguous admirer (Michael William Arnold). Proof positive that hermaphrodites are people, deserving of Hollywood endings, too!.

To see the trailer, visit The Skanner's YouTube Channel