Kam Williams, Special to The Skanner News
Published: 13 May 2011 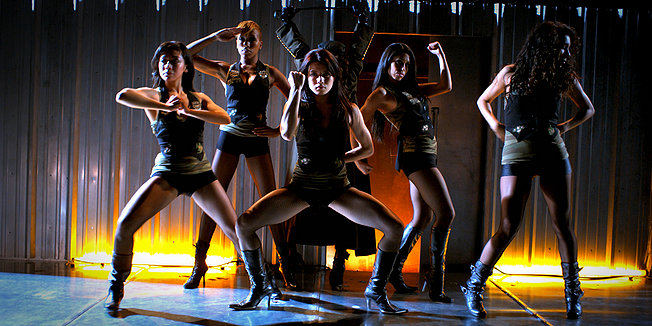 Go for It (PG-13 for profanity, sexuality, drug use and brief violence; Pictured at left) Overcoming-the-odds drama about a teenager (Aimee Garcia) with good grades but a bad attitude who dreams of dancing her way out of the 'hood in the underground clubs of Chicago. With Al Bandiero, Gina Rodriguez and Louie Alegria.

Priest (PG-13 for disturbing images and intense violence) Post-apocalyptic thriller about a rogue Catholic cleric (Paul Bettany) who breaks his vows when he embarks on a crusade against the undead after his niece (Lily Collins) is kidnapped by a bloodthirsty pack of vampires. Cast includes Christopher Plummer, Maggie Q, Cam Gigandet, Karl Urban and Brad Dourif.

Cameraman: The Life and Work of Jack Cardiff (Unrated) Golden Age of Hollywood documentary chronicling the career of Academy Award-honoree Jack Cardiff, the cinematographer who shot such screen classics as The African Queen, War and Peace, The Barefoot Contessa and Death on the Nile. Featuring reflections by Martin Scorcese, Kirk Douglas, Lauren Bacall and Dustin Hoffman.

City of Life and Death (R for sexuality, violence and brief nudity) Historical epic recreating the Rape of Nanking in 1937. Cast includes Ye Lu, Yuanyuan Gao and Hideo Nakaizumi. (In Mandarin and English with subtitles)

Everything Must Go (R for profanity and sexuality) Will Ferrell stars in this marital crisis drama based on "Why Don't You Dance," Raymond Carver's short story about an unemployed alcoholic befriended by a latchkey kid (Christopher Jordan Wallace) and a pregnant neighbor (Rebecca Hall) after his estranged wife changes the locks and tosses all of his belongings onto the front lawn. With Laura Dern, Stephen Root and Michael Pena.

The First Grader (PG-13 for disturbing violence and brief nudity) True tale, set in Kenya, about a former Mau Mau freedom fighter (Oliver Litondo) who at 84 decides to go to school for the first time in his life in order to learn how to read and write. With Naomie Harris, Sam Feuer, Tony Kgorge and Nick Reding.

Hesher (R for sexuality, profanity, drug use and disturbing violence) Joseph Gordon-Levitt stars in this morose meditation on mortality about a tattooed loner living in his van who crashes on the couch of the dysfunctional family of a little boy (Devin Brochu) mourning the untimely death of his mother (Monica Staggs). Cast includes Natalie Portman, Rainn Wilson, and Piper Laurie.

Make Believe (Unrated) Rabbit-out-of-the-hat documentary revolving around the sleight of hand of a half-dozen aspiring magicians vying for the title of Teen Magic Champion in the City of Las Vegas.

Skateland (PG-13 for violence, profanity, sexuality, and teen smoking and substance abuse) Romance drama, set in Texas in the early Eighties, about the rudderless, 19 year-old manager (Shiloh Fernandez) of a skating rink who reassesses his life priorities after bonding with the sister (Ashley Greene) of one (Heath Freeman) of his buddies.