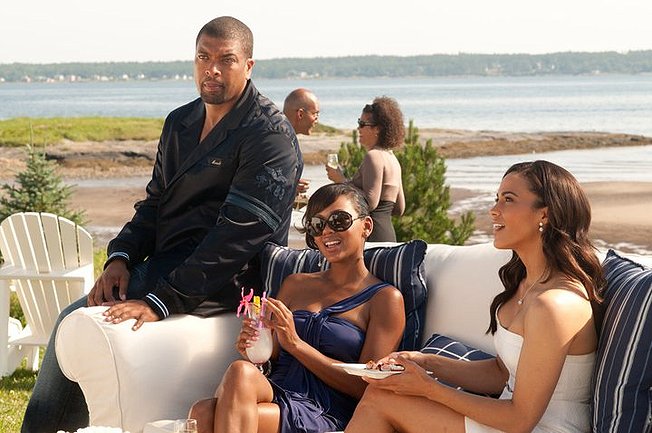 Jumping the Broom (PG-13 for sexuality and profanity) Ghetto-meets-bourgie comedy about the sparks which fly when the families of a bride (Paula Patton) and groom (Laz Alonso) from opposite sides of the tracks converge on Martha's Vineyard for an eventful weekend wedding. Ensemble includes Angela Bassett, Loretta Devine, Meagan Good, DeRay Davis, Mike Epps, Romeo, Gary Dourdan and Bishop T. D. Jakes.

Something Borrowed (PG-13 for sexuality and drug use) Romantic comedy based on Emily Giffin's novel of the same name about the complications which ensue after a successful attorney without much of a love life (Ginnifer Goodwin) sleeps with her best friend's (Kate Hudson) fiancé (Colin Egglesfield) on her 30th  birthday. With John Krasinski, Jill Eikenberry and Ashley Williams.

The Colors of the Mountain (Unrated) End of innocence saga, set in the Colombian countryside, about the plight of a 9 year-old boy (Hernan Mauricio Ocampo) who unwittingly lands in the middle of a civil war conflict after he and a couple of buddies (Genaro Aristizabal and Nolberto Sanchez) chase an errant soccer ball into a field booby-trapped by guerillas with lethal landmines. (In Spanish with subtitles)

Daydream Nation (R for sexuality, profanity, violent images and teen drug and alcohol abuse) Romance drama revolving around a precocious, 17-year-old from the big city (Kat Dennings) who moves with her widowed father (Ted Whittall) to a small town where she becomes embroiled in a love triangle with a teacher (Josh Lucas) and a stoner classmate (Reece Thompson).

Forks over Knives (PG for smoking and mature themes) Vegan documentary endeavoring to substantiate the proposition that most of the degenerative diseases afflicting humanity are a consequence of eating animals and processed foods. Featuring commentary by Junshi Chen, Gene Baur and Dr. Doug Lisle.

Harvest (R for profanity and brief sexuality) Skeletons-out-of-the-closet drama about the tensions which surface among members of a grieving family reunited for the summer in the wake of the passing of its beloved patriarch (Robert Loggia). Cast includes Jack Carpenter, Barbara Barrie, Arye Gross and Victoria Clark.

Hobo with a Shotgun (Unrated) Revenge comedy about a homeless vigilante (Rutger Hauer), recently arrived in a town called Hope, who sets about dispensing double-barreled street justice to corrupt cops, pedophiles and other dastardly evildoers. With Gregory Smith, Nick Bateman and Brian Downey.

An Invisible Sign (Unrated) Jessica Alba stars in this adaptation of Aimee Bender's best-seller of the same name about a 20-year-old schoolteacher who uses math as a means of helping students deal with emotional crises. Cast includes J.K. Simmons, Sonia Braga, Bailee Madison and Chris Messina.

Last Night (R for profanity) 7-year itch saga about a housewife (Keira Knightley) who goes out for drinks with an old flame (Guillaume Canet) on the same evening that her husband (Sam Worthington) finds himself tempted by an attractive colleague (Eva Mendes) while away on a business trip.

Octubre (Unrated) Peruvian morality play, set in Lima, about a lonely loan shark (Bruno Odar) who leans on the shoulder of his pious, next-door neighbor (Gabriela Velasquez) for help with caring for the newborn (Sheryl Sanchez) deposited on his doorstep by a prostitute he used to frequent. (In Spanish with subtitles)

Passion Play (R for sexuality, nudity, profanity, violence and drug use) Mickey Rourke and Megan Fox co-star in this crime thriller about a down-and-out jazz trumpeter who finds salvation with the help of a circus sideshow freak while on the run from a ruthless mobster (Bill Murray). Support cast includes Bud Cort, Rhys Ifans and Charlie Brown.

Under the Boardwalk: The Monopoly Story (Unrated) "Advance to Go" documentary explores the history of the classic board game while profiling some of the colorful players competing for the coveted title of Monopoly World Champ.