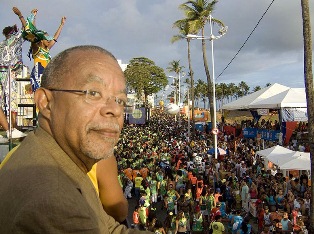 When you think of slavery in the Americas, I bet you assume that more Africans were brought to the U.S. than anywhere else in this hemisphere. But truth be told, only a tiny fraction were transported to this soil, with ten times as many being taken to Brazil, and even twice as many to Cuba.
This is just one of the fascinating factoids in store for viewers of "Black in Latin America," the latest PBSspecial produced by Harvard's Henry Louis Gates. Professor Gates has previously hosted "African-American Lives 1 & 2," " Faces of America," "Wonders of the African World," "Oprah's Roots," "Looking for Lincoln," and "America beyond the Color Line."
A half-dozen countries serve as the focus of this four-part series, namely, Cuba, Brazil, Mexico, Peru, Haiti and the Dominican Republic. Gates travels to each nation to talk to the locals, capturing the flavor of the present-day culture in the light of the lasting legacy of slavery. Despite having majored in Black Studies, I have to admit that I found all of the episodes extraordinarily informative.
For example, I had no idea that supposedly freedom-loving President Thomas Jefferson had not only refused to recognize Haiti after that nation declared its independence but that he derogatively referred to its emancipated inhabitants as cannibals. In terms of Cuba, I was surprised to learn of a recent return of a color-coded caste system on the island, ostensibly as a consequence of an influx of dollars from lighter-skinned relatives in the United States.
Similarly, Brazil, often promoted as a post-racial utopia, is presented here as the undeserving beneficiary of a myth yet to be realized. Who knew that slavery was only abolished there in 1888? And racism is apparently ubiquitous in Peru, too, where for a pittance many blacks still pick cotton in fields on the very same plantations as did generations of their ancestors.
Dedicated to Dr. Gates' recently-deceased, beloved father (whom you may remember from "African-American Lives"), "Black in Latin America"is a must-see for anyone interested in appreciating the history and continuing fallout of slavery South of the Border.