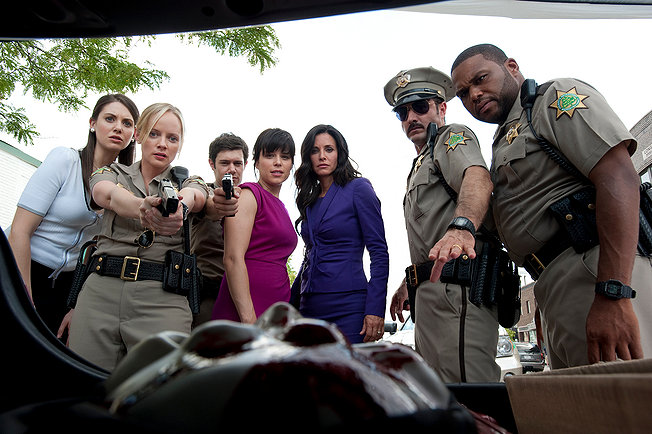 Armadillo (Unrated) Afghan War documentary shot by a journalist and cameraman embedded for half of 2009 with a unit of young Danish soldiers stationed in a dangerous region of Helmand province teeming with Taliban. (In Danish with subtitles)

Atlas Shrugged: Part 1 (PG-13 for sexuality) Initial installment of sci-fi trilogy based on Ayn Rand's 1957 novel of the same name revolving around a railroad executive's (Taylor Schilling) attempt to keep her business afloat amidst a crumbling American infrastructure. With Paul Johansson, Michael O'Keefe and Jon Polito.

The Double Hour (Unrated) Convoluted crime thriller, set in Turin, about a lonely, ex-cop (Filippo Timi) who falls head-over-heels for a Slovenian chambermaid (Ksenia Rapaport) he meets at a speed-dating bar only to have their whirlwind romance turn tragic when they venture to the country for a weekend getaway. (In Italian and Spanish with subtitles)

The First Beautiful Thing (Unrated) Prodigal Son flashback flick about a misanthropic college professor (Valerio Mastandrea) who returns to his hometown to care for his terminally-ill mother (Stefania Sandrelli). With Micaela Ramazzotti, Claudia Pandolfi and Marco Masseri. (In Italian with subtitles)

Fly Away (Unrated) Poignant coming-of-age drama about a single-mom (Beth Broderick) grappling with the challenge of how to handle her increasingly-independent autistic daughter (Ashley Rickards). With Greg Germann, J.R. Bourne and Elaine Hall.

Footprints (Unrated) Hollywood whodunit about a young woman (Sybil Temtchine) who awakens with amnesia one morning facedown on the famous sidewalk in front of Grauman's Chinese Theater where she proceeds to spend the rest of the day  trying to piece together her identity. With H.M. Wynant, Pippa Scott and John Brickner.

The Imperialists Are Still Alive (Unrated) NYC romance drama about a French immigrant (Elodie Bouchez) who finds it hard to focus on her blossoming love affair with a Manhattan med student (Jose Maria de Tavira) when she learns of the CIA's detention overseas of her childhood sweetheart as a suspected terrorist.

The Princess of Montpensier (Unrated) 16th C. costume drama about a teenage heir to the French throne (Melanie Thierry) who would rather wed her handsome young cousin (Gaspard Ulliel) than the aging nobleman (Lambert Wilson) she's been promised to.  (In French with subtitles)

A Screaming Man (Unrated) Dysfunctional family drama, set in Chad against the backdrop of civil war, and revolving around a prideful swimming pool attendant (Youssouf Djaoro) who resents his young son (Dioucounda Koma) for taking his job when the upscale hotel where he works is purchased by new Chinese owners. (In French and English with subtitles)

Square Grouper: The Godfathers of Ganja (R for underage illegal drug use) A seriocomic documentary depicting Miami's marijuana trade in the Seventies.