Comedians React With Horror at Will Smith's Oscar Slap 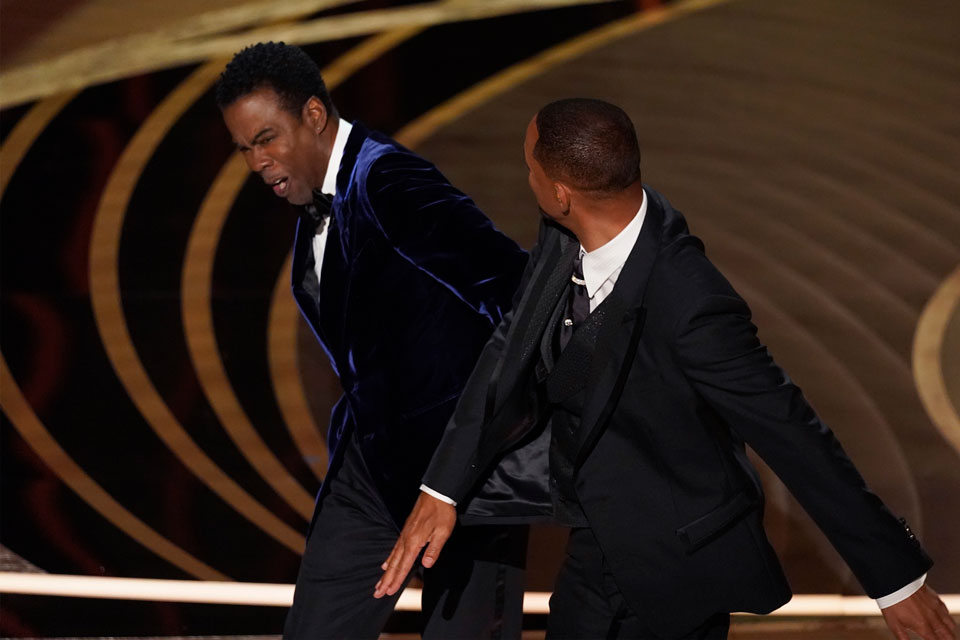 NEW YORK (AP) — Will Smith slapping Chris Rock at the Oscars provoked intense opinions online, especially from comedians who felt it was an assault on their art.

“Let me tell you something, it’s a very bad practice to walk up on stage and physically assault a comedian,” Kathy Griffin wrote on Twitter. “Now we all have to worry about who wants to be the next Will Smith in comedy clubs and theaters.

The violent exchange began when Rock took verbal aim at Jada Pinkett Smith’s shaved head, saying, “Jada, I love you. ‘G.I. Jane 2,’ can’t wait to see it, all right?” Rock’s reference was made from the 1997 film “G.I. Jane,” starring Demi Moore, who shaved her head to portray a fictional Navy Seal candidate.

Will Smith, her husband, walked onto the stage and took a swing at Rock with an open palm, generating a loud smack. Smith walked back to his seat and shouted for Rock to leave Pinkett Smith alone. Rock replied that he was just making a “G.I. Jane” joke — and Smith yelled back at him a second time.

Smith shouted at Rock to “keep my wife’s name out of your (expletive) mouth,” and the crowd hushed as it became clear this was no act. Smith later won the best actor Oscar; Rock chose not to file a police report.

“Will Smith owes Chris Rock a huge apology. There is no excuse for what he did. He’s lucky Chris is not filing assault charges," producer, director and actor Rob Reiner commented on Twitter.

George Takei said Smith's losing his cool was a bad look when so many people were watching: “Many people, especially kids, look up to actors. Because of that, we have an obligation to try to be good role models.

Pinkett Smith revealed in 2018 that she was diagnosed with alopecia. She has often discussed the challenges of hair loss on Instagram and other social media platforms. 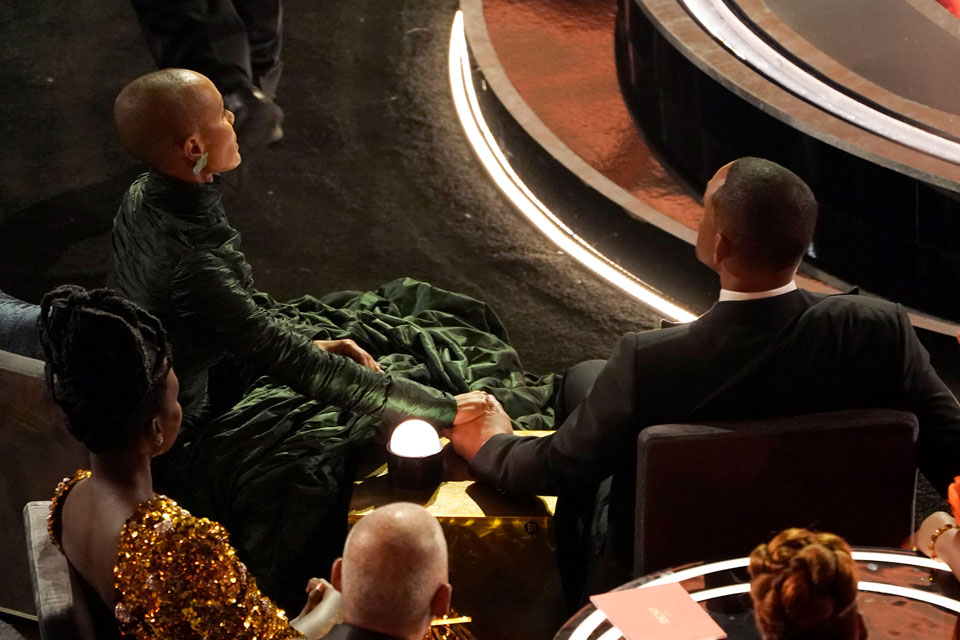 Jada Pinkett Smith, left, and Will Smith hold hands in the audience at the Oscars on Sunday, March 27, 2022, at the Dolby Theatre in Los Angeles. (AP Photo/Chris Pizzello)Some commentators noted that alopecia is a painful experience that many Black women go through and should not be joked about. Rock himself helped create the documentary “Good Hair,” exploring African American women and their relationship to their hair.

Nicki Minaj put herself in Pinkett Smith's shoes. “Imagine what it must feel like to be losing your hair to the point where you have to shave it bald. You think that’s easy to deal with for anyone? You don’t think she’s cried about that many times?” she wrote on Twitter.

Many in the auditorium came to console Smith, including Daniel Kaluuya, Nicole Kidman and Keith Urban. In the hours later the hashtags #ProtectBlackWomen trended. 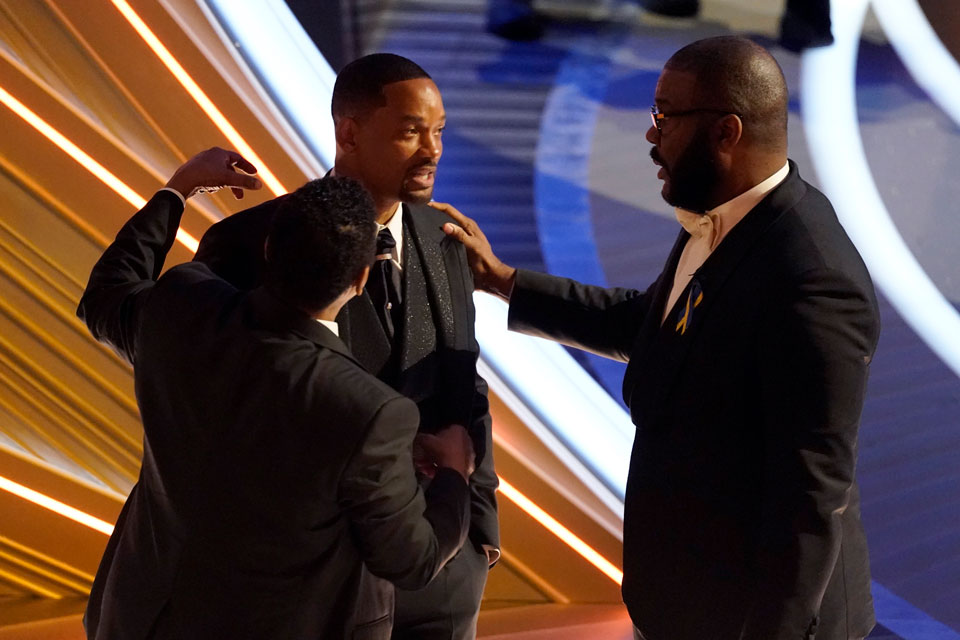 Sean Combs, from left, Will Smith and Tyler Perry appear in the audience at the Oscars on Sunday, March 27, 2022, at the Dolby Theatre in Los Angeles. (AP Photo/Chris Pizzello)However unfunny Rock's joke was, it paled in comparison to some awards show digs in years past, including from acerbic Ricky Gervais, who has skewered the likes of Leonardo DiCaprio, Judi Dench and Felicity Huffman.

Judd Apatow was highly critical of Smith in a now-deleted Twitter post, describing the attack “out of control rage and violence.” He noted that celebrities have been the target of jokes for decades: "They’ve heard a million jokes about them in the last three decades. They are not freshman in the world of Hollywood and comedy. He lost his mind.”

And That’s How We Do It

Richard Marx said no poor joke justified the response: “I guess millions of people can’t comprehend that no level of fame or accolades gives license to commit battery over a verbal joke.”

And Mark Hamill called the incident the ugliest Oscar moment ever, tweeting “Stand-up comics are very adept at handling hecklers. Violent physical assault... not so much."

I know we’re all still processing, but the way casual violence was normalized tonight by a collective national audience will have consequences that we can’t even fathom in the moment. #Oscars2022

Janai Nelson, president and director-counsel of the NAACP Legal Defense and Educational Fund, wrote: “I know we’re all still processing, but the way casual violence was normalized tonight by a collective national audience will have consequences that we can’t even fathom in the moment.”

But former late-night talk show host Conan O’Brien was among those making light of the situation, writing on Twitter: “Just saw the Will Smith slap. Anyone have a late night show I can borrow just for tomorrow?”

LOS ANGELES (AP) - The Academy of Motion Pictures Arts and Sciences on Monday condemned the actions of Will Smith during Sunday night's Oscars and launched an inquiry into his slapping of presenter Chris Rock.

In a statement Monday, the film academy said: "The Academy condemns the actions of Mr. Smith at last night's show. We have officially started a formal review around the incident and will explore further action and consequences in accordance with our bylaws, standards of conduct and California law."

The fallout from Smith's onstage assault continued Monday, as Hollywood and the public continued to wrestle with a moment that stunned the Dolby Theatre crowd and viewers at home, and may have passed all others - even that gold-standard flub, EnvelopeGate - in Academy Awards infamy.