On the Ice, a Question: Where Are the Black Figure Skaters? 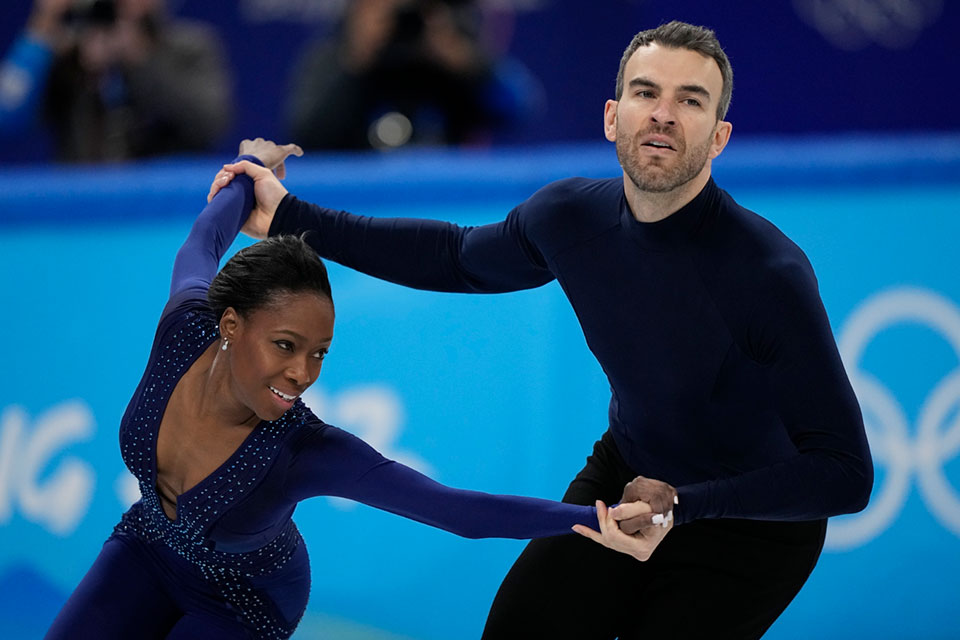 BEIJING (AP) — Before her own Olympic career began, Canadian figure skater Vanessa James had seen Black Girl Magic on the ice. It was on display at the 1998 Nagano Winter Olympics, when French skater Surya Bonaly leapt into the air, kicked into a backflip and landed on one leg.

The thrilling move has neither been widely attempted since nor accepted by judges for international competitions, such as the Olympic Games, and thus “the Bonaly flip” has never become a big thing. Yet despite the move being controversial at the time, Bonaly’s tenacity in attempting it has inspired many who have followed her.

“I wanted to do a backflip, but I was always really too scared to try it,” says James, who is skating in Beijing in her fourth Winter Games after representing France in Vancouver and Pyeongchang.

The Salchow, the Biellmann, the Charlotte spiral — these figure skating standards are named after white people from the 20th century. And in a century-old sport that was largely European until just a few decades ago, some wonder: How can more Black athletes make the same lasting imprint on it?

There are no Black athletes competing in figure skating for the Americans this year, though the U.S. team includes five Asian American skaters, an openly LGBTQ skater and the first gender-nonbinary skater. Mexico’s figure skating team consists of Donovan Carrillo, the lone representative from Latin America.

Kristi Yamaguchi and Michelle Kwan came to define Asian American representation at the Olympics in the 1990s, while China, Japan and South Korea became more prominent in the early 2000s. And with Nathan Chen clinching a gold medal, and Alysa Liu and Karen Chen on the American team, the pipeline of figure skaters has yet to show signs of slowing.

James, who skates in the pairs event with teammate Eric Radford, is the only Black figure skater competing for any nation in Beijing. She carries not just the hopes of Canadian and French skaters, but also Black girls and women, boys and men across the world who strain to see themselves represented on the ice and slopes during the Winter Games. 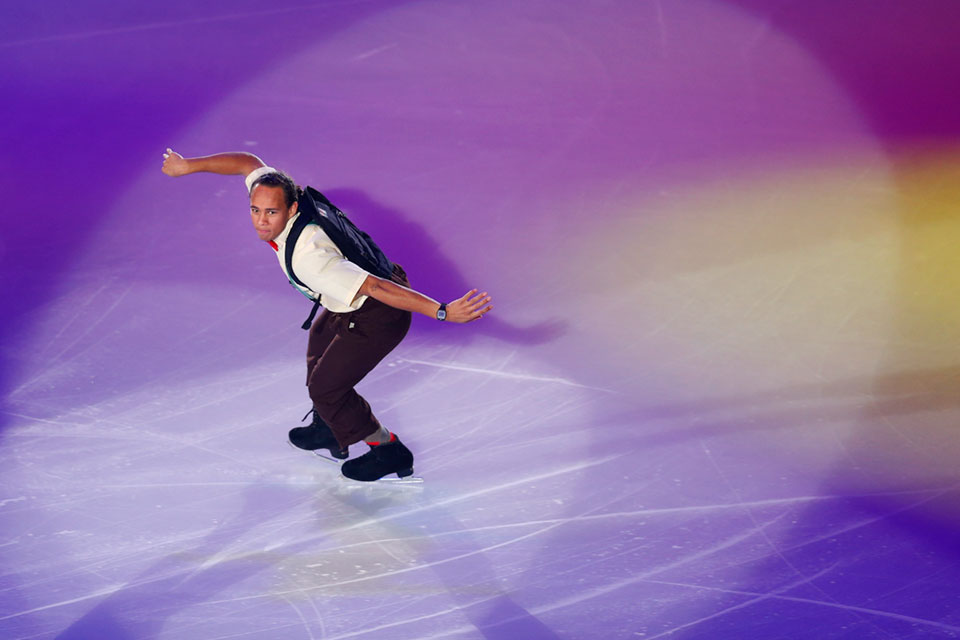 FILE - Elladj Balde of Canada performs during the gale exhibition of the NHK Trophy figure skating in Osaka, western Japan, Sunday, Nov. 30, 2014. Balde’s unconventional, hip-hop-inflected dancing style has gone viral on social media in recent years, allowing him to leverage the notoriety to push for both change and diversity. (AP Photo/Shizuo Kambayashi, File)

Whether it was Europe's blonde-haired, blue-eyed and petite figure skating standard or a period of racial segregation at rinks in the U.S., Black skaters who broke barriers in the sport did so with metaphorical weights chained to their skates.

“That doesn’t leave a lot of room and a lot of time for Black skaters to innovate,"

Baldé says, “especially if a sport is confining everyone to a certain style.”

Baldé’s unconventional, hip-hop-inflected dancing style has gone viral on social media in recent years, allowing him to leverage the attention to push for both change and diversity. The Stake Global Foundation, which he cofounded last year, works to build or rehabilitate ice rinks and exposes Black people and other people of color in Canada to figure skating.

For consecutive Winter Olympics, the Canadian and French Olympic teams have included Black skaters, which some say is a reflection of Bonaly’s influence. But the American team has struggled to establish a strong pipeline of Black talent.

Historians trace the problem to the stories of Black American skaters such as Joseph Vanterpool, a World War II veteran from New York City who took up professional skating after seeing an ice show in England but was rarely featured outside of all-Black showcases. Mabel Fairbanks, a pioneer whose Olympic dreams were dashed by racist exclusion from U.S. Figure Skating in the 1930s, was by far the most successful of the sport's Black trailblazers.

Fairbanks later opened doors that were closed to her for generations, including one of her mentees, Debi Thomas. In the 1988 Calgary Games, Thomas became the first Black American to medal at the Winter Olympics. But few others have come close to appearing in Olympic competition after her. 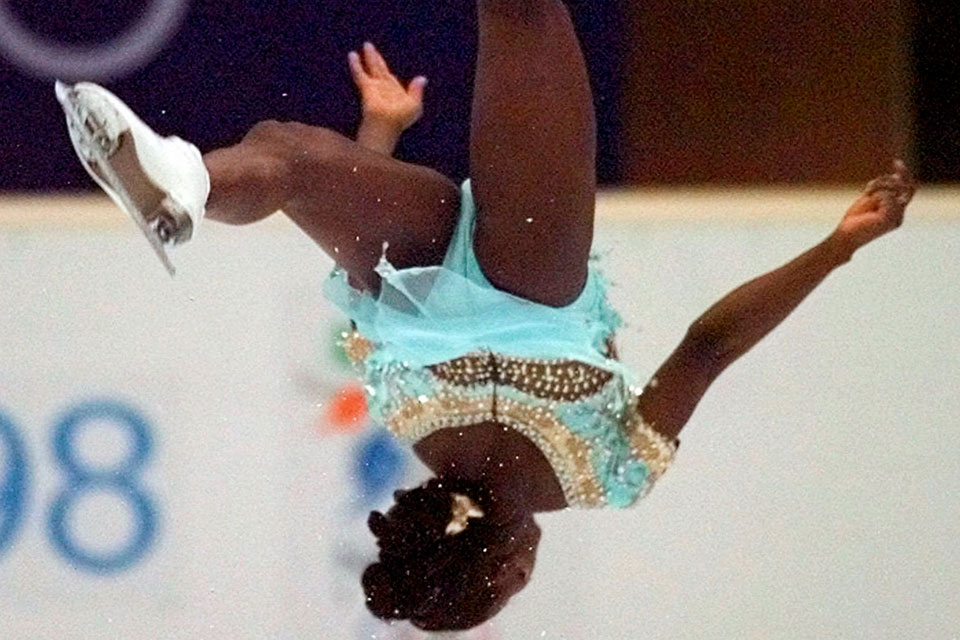 FILE - France's Surya Bonaly performs a back flip during her free skate program at White Ring Arena Friday, Feb. 20, 1998, in Nagano, Japan. The thrilling move has neither been widely attempted since nor accepted by judges for international competitions, such as the Olympic Games, and thus “the Bonaly flip” has never became a big thing. (AP Photo/Eric Draper, File)

“How did somebody like Debi Thomas have the success that she had, break down the barriers that she did, but yet didn’t that lead to further influx of BIPOC (Black, Indigenous and people of color) skaters following in her footsteps?” wonders Ramsey Baker, the executive director of U.S. Figure Skating.

It’s a question the governing body had wrestled with for years, in addition to the socioeconomic barriers associated with elite competition. Then, diversity in figure skating became an even bigger focus following the 2020 murder of George Floyd by American police, amplifying the Black Lives Matter movement’s calls for racial justice and equity.

As protests over police brutality erupted across the world, the figure skating associations in Canada and the U.S. responded with pledges to answer protesters' cries and make changes from within. However, both also have faced some criticism from Black athletes who felt the pledges were a ploy for media attention.

Racial turmoil in the US

Last year, U.S. Figure Skating hired Kadari Taylor-Watson, a Black woman, as its first director of diversity, equity and inclusion. Her work has included its first diversity census of skaters, judges and other sport officials. Through a working group, the association plans to put tangible action behind the pledge to be even more inclusive of Black skaters.

“We have to think about the 100 years of not just U.S. figure skating history, but the 100 years of U.S. history," Taylor-Watson says, "and all of the racial turmoil that has been going on in our society that created those barriers.

“We don’t want to invite BIPOC skaters into a community that is not welcoming for them or ready for them.”

James’s participation in the Winter Games coincides with Black History Month, an annual observance that originated in the United States but has been recognized in Canada, Britain and increasingly in other parts of Europe.

Former French Olympic figure skater Maé-Bérénice Méité, who is Black, gave James a shoutout over Instagram ahead of the first day of the figure skating team competition in Beijing last week.

“So to all of you who’d like to support an example of what Black excellence looks like, I encourage you to support my best friend,” Méité wrote to her more than 52,000 followers.

James says the two came up in the sport together. “It’s important to have her support because we see each other when we look in the mirror," James says. “When she’s on the ice, I see me.”

She and Méité know they are beacons of inspiration for young, aspiring Black skaters. James says she imagines that somewhere, young Black girls are watching the Winter Games and thinking, “I look like her. I wanna be just like her. I can do that. I can be better than that.”

“That’s the key to excellence,” James adds. “It’s not just seeing it once. It’s recreating it and repeating it. We need that. We need to grow.”