‘In The Heights’ Is the Infusion of Joy We Needed 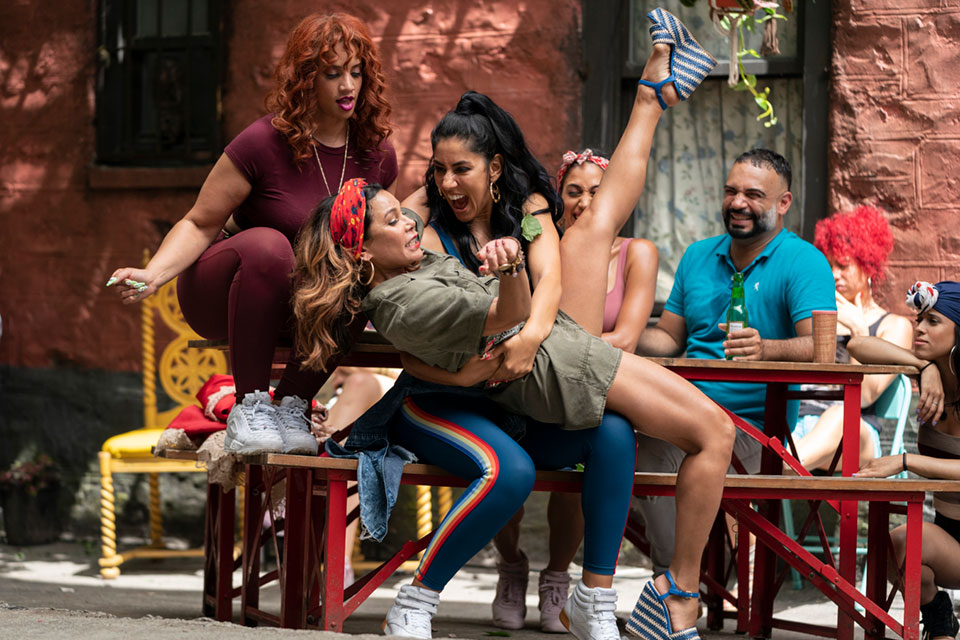 “I am Usnavi and you prob'ly never heard my name,” declares bodega owner Usnavi at the start of “In the Heights,” Lin-Manuel Miranda’s contagiously joyous ode to his beloved Washington Heights neighborhood. “Reports of my fame are greatly exaggerated.”

Um … maybe not for long. Projects by Miranda tend to attract a wee bit of attention.

Even in the annals of musical theater, by nature filled with Cinderella stories, “In the Heights” has an amazing backstory. It began two decades ago when a college student at Wesleyan had extra time on his hands — his girlfriend was studying abroad — so he started to write a show. A show that represented the Latino immigrant experience as he, son of Puerto Rican parents, saw it. A show that melded the things he loved: hip-hop, Latin music and dance, rap, and of course musical theater.

The kid was Miranda, and “In the Heights" eventually made it all the way to the Tony podium, winning best musical. Of course, Miranda’s own story was just beginning. “Hamilton,” his genre-bending phenomenon, was years away.

A whole other animal

Comparisons between the two are inevitable, but they’re different animals. “In the Heights,” directed with unabashed exuberance by Jon M. Chu from a screenplay by Quiara Alegria Hudes, doesn’t seek to reframe American history; it uses Miranda’s rapid-fire wordplay and hybrid of traditional and contemporary styles to tell the story of one community — one intersection, even — through universal experiences, like encroaching gentrification. This updated version also touches on the Dreamers, and a golf reference to Donald Trump has been switched to Tiger Woods. But its main thrust is still the bonds of community, family and home. (If you look closely during one song, you can even spot Miranda’s parents.)

“In the Heights” also benefits from an exquisite sense of timing — cultural timing. The release was postponed a year; theaters are now open. “Lights up,” begins the infectious opening number, and those words are perfect: Lights up on Washington Heights, yes, but also on a reawakened New York, where many are tentatively returning to pre-pandemic rhythms after a miserable year, eager for shared experience. “In the Heights” is a work that reads the room: a film without an ounce of cynicism, that wears its big heart proudly on its sleeve and dares you not to join in. Two lovers, suddenly dancing up the side of an apartment building? A Busby Berkeley-style dance number in a city pool? Yup. And yup. 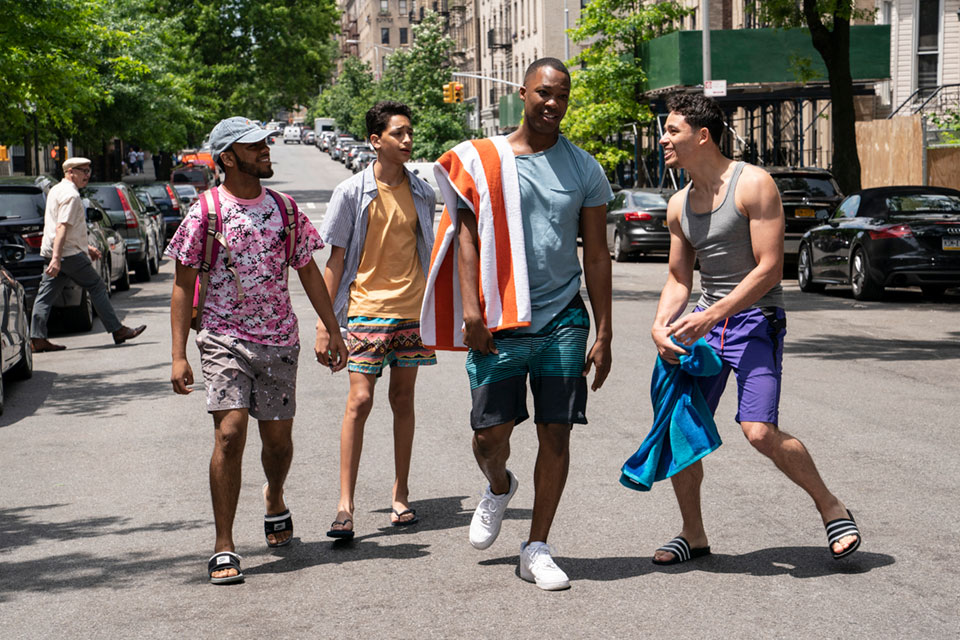 Usnavi, we learn, aches to return to the Dominican Republic, where his late father owned a beach kiosk. Miranda played Usnavi onstage but has handed off to Anthony Ramos, a “Hamilton” alum (that’s him with the “ten-dollar founding father” line) who eases into leading-man duties with warmth, humor and charm.

Though the film begins with a framing device of Usnavi recounting history to children on a beach — a choice that comes off as overly sentimental — it kicks into gear in that opening number, in which Usnavi introduces all the important characters.

There’s Benny (Corey Hawkins, terrific), who works at the taxi service owned by Kevin Rosario (Jimmy Smits). There’s Vanessa (Melissa Barrera), for whom Usnavi secretly pines -- she works at the salon but dreams of being a fashion designer. This eight-minute number culminates in a street dance sequence (with ebullient choreography by Christopher Scott) in the center of Washington Heights. Most striking about these dancers: they’re different ages, and different body shapes. They look like people.

Soon Nina (singer Leslie Grace) arrives for the summer from Stanford, harboring a secret. Always the smartest kid on the block, Nina feels marginalized as a Latina student, and has dropped out, putting her on a collision course with her proud father. Another plot addition: young Sonny is a Dreamer, and his future in the US is a risk. This side plot seems rather rushed, and a street protest scene seems an afterthought.

But the plot was always the lesser part of this equation. What shines are the inventive and joyous musical numbers — like “96,000,” in that swimming pool, in which everyone imagines how they’d spend lottery winnings. Or “Carnaval del Barrio,” in which Daniela urges friends to celebrate amid a blackout. The stirring “Paciencia y Fe (Patience and Faith)” gives Merediz her moment.

All characters are beautifully cast, but a standout is Hawkins, who has the soulful voice of a young Christopher Jackson (the original Benny, who has a cameo here) and charisma that burns through the screen. 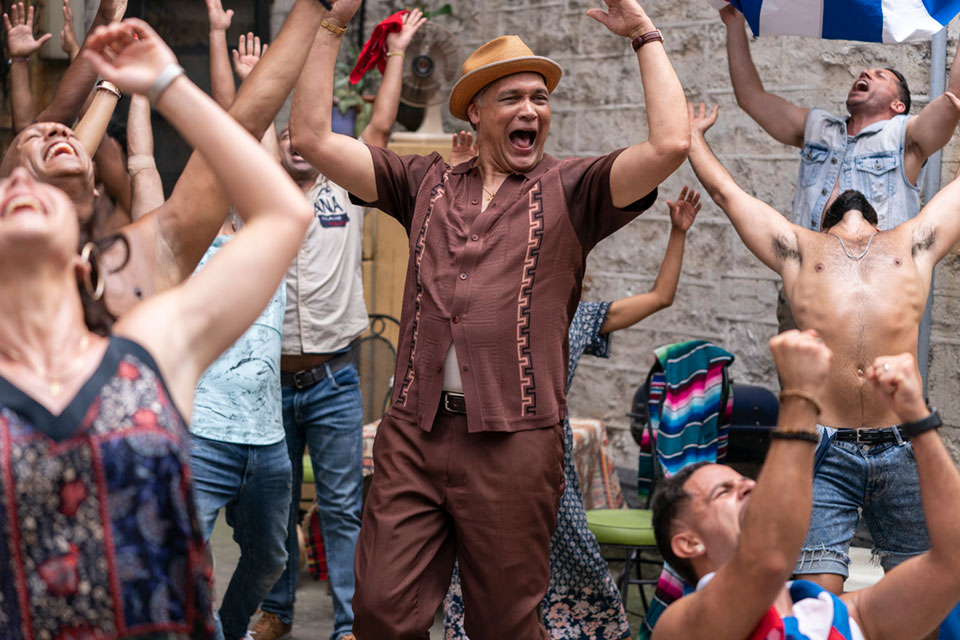 Then there’s Piragua Guy -- he sells those shaved ice treats, drenched in flavored syrup. The small role was originally scratched, for length — until a guy named Miranda decided to play it. His sugary concoctions seem an apt metaphor for the film itself: Sweet relief at the right moment, and a treat for a hot summer filled with hope and possibility.

“In the Heights,” a Warner Brothers release, has been rated PG-13 by the Motion Picture Association of America “for some language and suggestive references.” Running time: 143 minutes. Three and a half stars out of four.