What to Watch on BET, BET+ and BET Digital 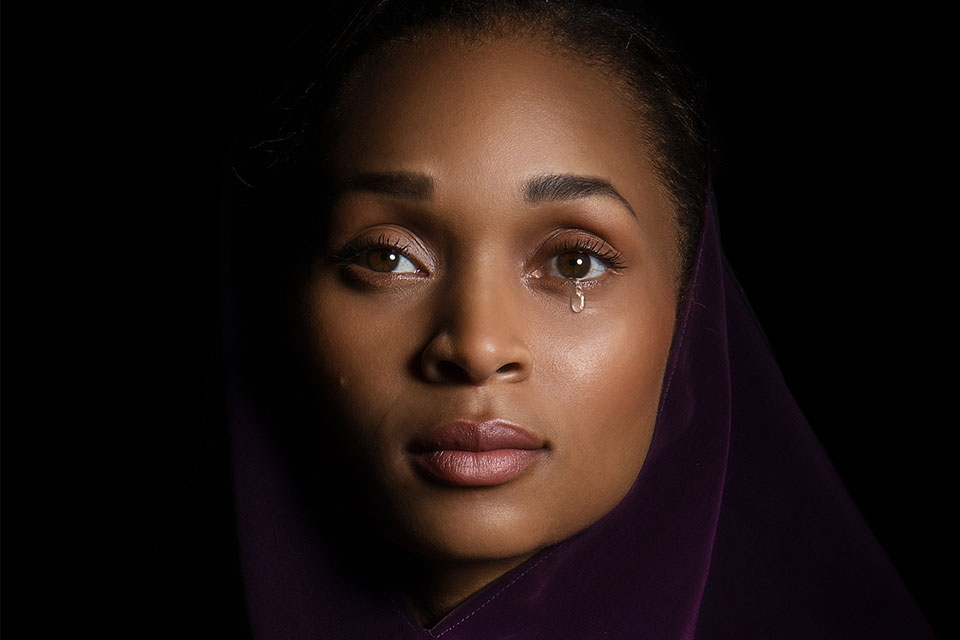 Season seven of BET Her hit docu-series, " BEING," returns to chronicle the lives of dynamic African American women and their intimate stories of struggle, perseverance, and success in the entertainment industry. Each one-hour episode will highlight one of music and entertainment's most compelling figures, featuring never-before-seen photos, videos, revealing interviews and more. This season will document the lives of Deborah Cox, Arlan Hamilton, Angela Yee, Yandy Smith and Kemba Smith. " Being: Angela Yee" premieres Saturday, March 21. 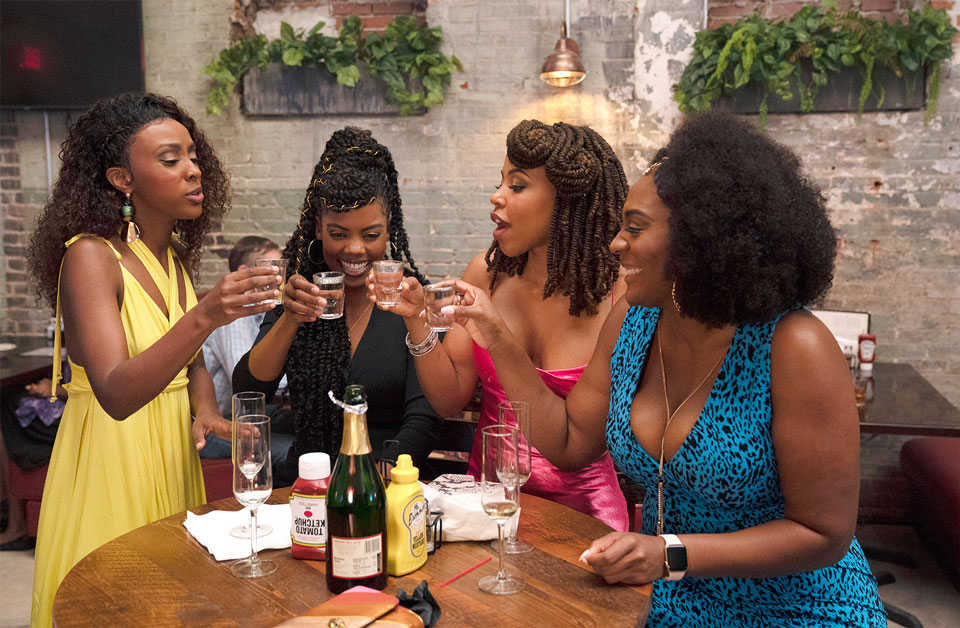 (L-R) EBONY OBSIDIAN, NOVI BROWN, KJ SMITH and MIGNON Star in TYLER PERRY’S SISTAS Episode #121 " From The Balcony" airs Wednesday, March 25 - The dating game has Danni at a disadvantage when her feelings get the best of her. Andi tries to be strong for Gary. Karen stands strong on her principles. Sabrina opens up in the midst of a tragedy.

" TYLER PERRY'S SISTAS " follows a group of single black females as they navigate their "complicated love lives," careers and friendships through the ups-and-downs of living in a modern world of social media and unrealistic relationship goals. The one-hour drama takes viewers on a roller coaster ride of emotions and hilarious moments that are the epitome of #squadgoals. KJ Smith, Mignon, Ebony Obsidian, Novi Brown, DeVale Ellis, Chido Nwokocha, Anthony Dalton, Brian Jordan Jr., and Kevin A. Walton star in "TYLER PERRY'S SISTAS." 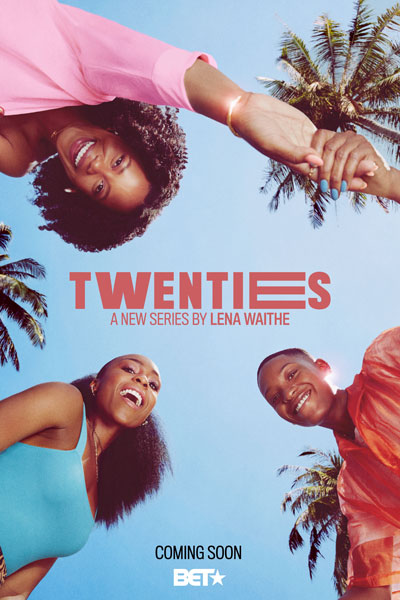 "TWENTIES," from Executive Producer and Creator Lena Waithe, centers around a screenwriter, Hattie, and her girlfriends Marie and Nia as they pursue their dreams and love, while testing the limits of "diversity, equity, and inclusion" in Los Angeles. While they live separate lives, the girls lean on each other for guidance as they navigate their twenties. Jonica T. Gibbs,Christina Elmore, and Gabrielle Graham star in " TWENTIES." Lena Waithe executive produced with Susan Fales-Hill, who co-show ran with Waithe. Rishi Rajani and Andrew Coles also executive produced. Justin Tipping directed the pilot, and, also executive produced.

Episode #203 "Don't Wanna Love You" airs Wednesday, March 25- - The powers of influence are explored when social media influencer, Tia, lands a high-paying one-night gig at a strip club while David comes under the influence of a new megachurch. The episode will feature a guest appearance by Jaleel White.

Executive Produced by Lena Waithe and Halle Berry, " BOOMERANG " is a half-hour subversive, smart, serialized comedy, fueled by romance, friendship, gender politics, love, and of course, sex. Starring Brittany Inge, Tetona Jackson, Leland Martin, Lala Milan, Tequan Richmond and RJ Walker, the series follows a group of childhood friends who are looking to make their own mark in the world…all while navigating their feelings for each other. For images, bios and additional show assets go to https://www.betpressroom.com/program/boomerang/

Following are some of the week's additional highlights on BET:

"ALL ABOUT THE BENJAMINS" at 8:30 PM ET/PT — Starring Mike Epps, Ice Cube, and Eva Mendes.

**Descriptions are listed above under "What To Watch" Spotlight section.

After neglecting their friendship, best friends Ari ( Ryan Michelle Bathe ), Hazel ( Jill Scott ) and Bree ( Michelle Buteau ) reunite to help each other through rough patches in their lives. Together, they navigate music superstar Hazel's tabloid-ridden divorce, campaign manager Ari's unsatisfying marriage to her political candidate husband, and orthopedic surgeon Bree's cheating husband. Tired of always being the ones to make sacrifices in their lives, Ari, Hazel and Bree vow to prioritize their friendship and have more fun. Along the way, the women learn that as long as they have each other, there's nothing they can't do. The 9-episode, half-hour, scripted series, "First Wives Club," is based on the popular 1996 film from Paramount Pictures, which featured Diane Keaton, Bette Midler, and Goldie Hawn. Executive produced and written by Tracy Oliver, writer for the box office hit, "Girls Trip." For images, bios and additional show assets go to: https://www.betpressroom.com/program/first-wives-club/

" BIGGER," a half-hour scripted comedy starring Tanisha Long, Angell Conwell, Rasheda Crockett, Chase Anthony, and Tristen Winger, takes place in the East Atlanta neighborhood, Little Five Points. The series follows a single-black-woman who is dealing with the threat of marriage to a boring-in-bed boyfriend and the sudden, random death of a college acquaintance. The tragedy drives her ambitious group of friends to take a deeper look at their stagnant lives, asking themselves— is there something bigger and better in life. The first three episodes of the series will be made available at launch with additional new episodes rolling out on a weekly basis. " BIGGER " was created by Felisha Marye and executive produced by Will Packer and Devon Shepard, who also served as the showrunner. For images, bios and additional show assets go to: https://www.betpressroom.com/program/bigger/

BET+'s new original movie " SACRIFICE " starring Paula Patton ("Hitch," "Precious"), takes place in Los Angeles following Daniella Hernandez, played by Patton, a highly sought-after entertainment lawyer. The legal thriller tracks Daniella as she navigates the nefarious lives of her rich and famous clients. Daniella has a reputation that proves problematic to LA Law enforcement, forcing her to be at odds with her sorority sister turned nemesis District Attorney Beverly Rucker. In an attempt to protect her often unscrupulous clients, Daniella enlists the services of her resourceful assistant and a young ex-hacker and tech genius. " SACRIFICE " is executive produced, written, and directed by Chris Stokes. Marques Houston also serves as the film's co-executive producer for Footage Films. For images, bios and additional show assets go to: https://www.betpressroom.com/program/sacrifice/

An adaption of the groundbreaking, critically acclaimed television version American Gangster, " AMERICAN GANGSTER: TRAP QUEENS " will give audiences a look into the lives and trials of some of America's most notorious female gangsters. Each episode employs first-person accounts from the women themselves and cinematic re-creations to give viewers a fully immersed experience into the twisted criminal lives they led.

" DARK MONEY " tells the fictional story of the Mensahs, an ordinary working-class family from North London whose youngest son, Isaac (Max Fincham), upon returning home from filming a major Hollywood movie, shatters the family's world when he reveals he was abused by a renowned filmmaker while abroad. The four-part BET+ original explores the impossible set of decisions and the consequences that follow when Issac's parents, Manny ( Babou Ceesay ) and Sam Mensah's ( Jill Halfpenny ) decide to accept a substantial pay-off in return for their silence. A timely and relevant story about the struggle to heal, protect those you love, and seek justice in the face of unfathomable trauma; attempting to answer the question "what is the real cost of silence?"

"PREACHER LAWSON: GET TO KNOW ME" ON BET+

In BET+'s first original comedy special, " PREACHER LAWSON: GET TO KNOW ME," Preacher offers a hilarious spin on his life experiences, including his run on American's Got Talent, and his ongoing life struggles with kitten allergies, veganism, and cold weather-induced ashiness. The hour-long special is now available exclusively through BET's new streaming service. Filmed at the renowned Vic Theatre in Chicago, " GET TO KNOW ME " is directed by Brian Volk-Weiss, and produced by Comedy Dynamics, A Nacelle Company, the team behind dozens of Grammy award-winning comedy programs, as well as platinum-level specials like Ali Wong's Baby Cobra and Tiffany Haddish's She Ready: From The Hood To Hollywood.

Additionally, the first twelve episodes of season one of "TYLER PERRY'S THE OVAL," original film "INFLUENCE," thousands of TV episodes and movies from the best Black creators are available to stream now exclusively on BET+, all in one place, commercial-free.

Following are additional digital highlights to read and watch on BET Digital:

"THE KICK-BACK COUCH: TWENTIES ":  A rotating list of guests, including everyone from some of your internet faves to weekly home-viewers, jump in for a hilarious weekly reaction/recap video covering the latest episode of Lena Waithe's " TWENTIES."

"BOOMERANG" AFTERSHOW: In a funny and occasionally over-the-top recap series, Lena Waithe catches up with the breakout stars of her hit show " BOOMERANG " to get their reactions and in-depth character analysis on situations in the show.

BET Digital launched a new daily video series highlighting the trending topics of the day. From celebrity news and election insights to COVID-19 updates, BET.com has you covered. Watch and share the link below:

Glam Gap: Exploring influencers in the style, beauty, and lifestyle space, BET.com launched their weekly Glam Gap video series featuring Honey Pot founder Beatrice Dixon discussing her startup journey and the positive response she received after the backlash to her Black History Month ad for Target. Watch and share the links below:

#ReclaimYourVote: Mike Bloomberg interview: BET Digital traveled to Washington, DC to interview Democratic presidential Mike Bloomberg about his plan to address the concerns of the American-American voters prior to dropping out of the campaign race. Watch and share the links below:

About BET: BET, a subsidiary of ViacomCBS Inc. (NASDAQ: VIACA, VIAC), is the nation's leading provider of quality entertainment, music, news and public affairs television programming for the African-American audience. The primary BET channel is in 90 million households and can be seen in the United States, Canada, the Caribbean, the United Kingdom, sub-Saharan Africa and France. BET is the dominant African-American consumer brand with a diverse group of business extensions including BET.com, a leading Internet destination for Black entertainment, music, culture, and news; BET HER, a 24-hour entertainment network targeting the African-American Woman; BET Music Networks - BET Jams, BET Soul and BET Gospel; BET Home Entertainment; BET Live, BET's growing festival business; BET Mobile, which provides ringtones, games and video content for wireless devices; and BET International, which operates BET around the globe.

ABOUT BET+: BET+ is a premium online streaming service with exclusive originals and thousands of TV episodes and movies from the best Black creators. A joint venture between BET Networks and Tyler Perry Studios, BET+ allows users to stream Black culture including hit movies, TV shows, stand-up comedy, award shows, and specials, all in one place, commercial free. The new service from BET Networks, a subsidiary of ViacomCBS Inc., is the official home of Tyler Perry's film, TV and stage works. The ad-free subscription video-on-demand service also provides users with access to original content from the likes of Will Packer, Tracy Oliver and many more. Visit BET.com/BETPlus to learn more.

About BET Digital: BET Digital is the interactive arm of BET, a subsidiary of Viacom Inc. (NYSE: VIA, VIA.B) and the preeminent provider of quality entertainment, music, news and public affairs initiatives for the consumers of African-American culture. BET.com, the premier online destination managed by BET Digital, is a leading Internet source for Black entertainment, music, culture, and news. Other divisions managed by BET Digital portfolio include BET Mobile, which provides apps, ringtones, games and video content for wireless devices; BET.com/BETHer the online extension for the 24-hour entertainment network targeting the African-American woman; BET Video On Demand (VOD), one of the largest On Demand service providing African-American content; and the BET Vertical Ad Network, a leading advertising network targeting the high quality consumers of African-American culture with more than 150 content publishers.