'When They See Us' Actors Revisit the Central Park Five Case 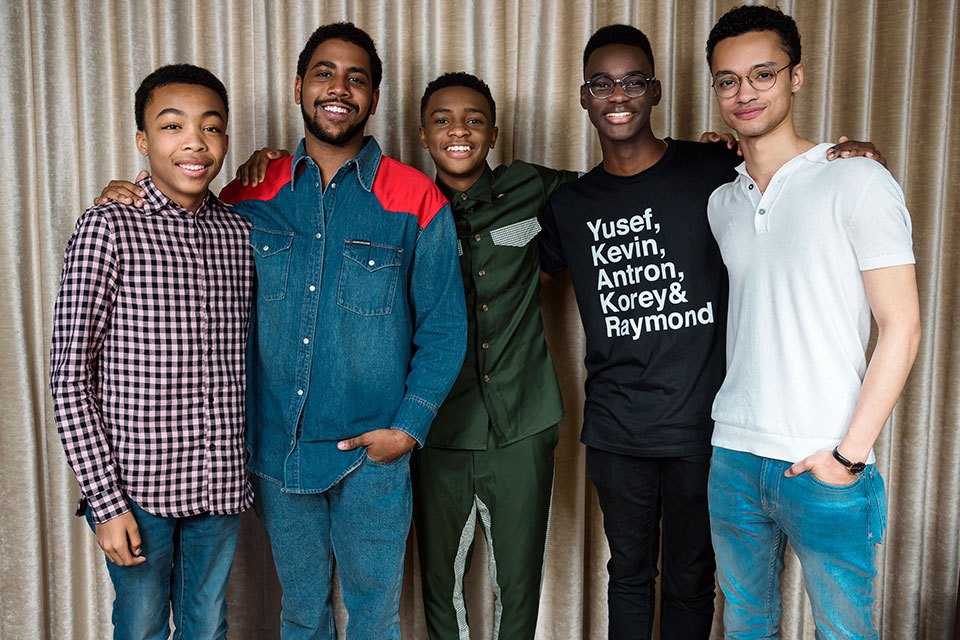 NEW YORK — Actor Jharrel Jerome, perhaps best known for his role in "Moonlight," recalls walking to school a few years ago in his native New York City, worried about an upcoming test, when he was stopped by two police officers.

He immediately froze in fear. What did he do wrong? Did he walk weird? Did he say something? Jerome let them look though his notebooks, papers and pens. Then they let him go. He was still shaking at his desk hours later.

"You just wonder what was in their mind and what they see in me when I'm just trying to be as good as I could be," he recalled.

Jerome, 21, drew heavily on that testy interaction to play Korey Wise, an innocent man who spent 12 years behind bars for a rape in Central Park he never committed. "Thinking about that experience and then thinking about it times ten is terrifying," he said.

Wise was one of five Black and Latino teenagers — the others were Antron McCray, Kevin Richardson, Yusef Salaam, Raymond Santana — who were coerced into confessing to the crime and are collectively known as the "Central Park Five."

In Ava DuVernay's new four-part Netflix series "When They See Us," the horrific odyssey the five endured is shown over 25 years, from the 1989 night they were arrested to the day a settlement was reached with the city in 2014.

The case was drawn on racial lines from the outset, with the victim being a young White woman, and it drew worldwide attention. Tabloid headlines compared the teens to a wolf pack, and Donald Trump took out newspaper ads calling for the return of the death penalty in New York state. It took years for the five to be exonerated, and they spent most of their youth in prison. Another man was found guilty of the attack.

The five young actors who play the accused in the first half of the series were horrified to learn details of the case and hope it can lead to changes in the judicial system.

"It hurts me to think that it's 2019 and it's not that I don't still hear of stories exactly like this," said Marquis Rodriguez, 21, who plays Santana and grew up in Brooklyn.

The two New Yorkers — Jerome and Rodriguez — were acquainted with the case before landing their roles, but the three others — Asante Blackk, 17, Caleel Harris, 15, and Ethan Herisse, 18 — hadn't heard of the plight of the Central Park Five. Now they think it's too important to forget.

"It's something that needs to continue to be told, to remind everyone that miscarriages of justice can happen," said Herisse. Harris agreed, and said the case is about something else, too: "It is a story of survival."

Questionable police tactics have led to a long list of troubling police encounters with young Black men, including instances that have resulted in death: Sean Bell, Oscar Grant, Eric Garner and Michael Brown among them.

"It kind of blurs together and that's just how it is living in America as a young man of color," said Blackk, who grew up in and around Washington, D.C. "Multiple experiences day after day and it kind of becomes normal to you and that's not OK."

Jerome and Rodriguez said their mothers told them about this ugly chapter in city history, hoping their sons would learn to be respectful of police but also not be too pliant.

"It was just something that she thought was really important for me to know, part of my history and almost a cautionary tale — just how quickly things can go terribly, terribly wrong especially for a young man of color in this city," Rodriguez said.

Jerome's mother grew up near where the attack took place and as a girl of 12 or 13 wasn't allowed to go to Central Park for two years. "That kind of probably stayed with her as she raised her kids," he said. "She made sure that we were aware of stories like that because their case was one of millions of others that we've heard about."

The case still echoes today in no small part to recent instances of exonerated, railroaded defendants and by who occupies the White House. "We've definitely made progress but there is so much more progress to be made," said Blackk.

"We're still living in a time where our president has tried to ban an entire religion from entering this country," he added, referring to Trump's attempt early in his presidency to ban foreigners from seven Muslim-majority countries from entering the United States.

To get into character, all five actors met their counterparts, who charmed the young men with their cheer despite the hardships they faced. Richardson cracked jokes. McCray was warm. Santana nicely offered specific details of his ordeal. Wise was youthful, as if stuck in amber.

"I mean, the man matches his hat to his shirts to his sneakers — still like the '90s. He's all about '90s culture, '90s hip-hop, as if he kind of was in a time machine and stayed there," said Jerome.

Rodriguez still has a hard time wrapping his head around the fact that Santana was only 14 at the time of his arrest and maintained his innocence even as he faced police coercion.

"I did not know if I would be able to hold the weight of what he held at that age," said Rodriguez.

"I know for sure I would have broken under it. And he came out of it alive and functioning and happy now, which is absolutely unbelievable."

The young actors seem changed by the experience of working on the project. All — from Blackk, who enjoyed his first professional acting role, to the experienced Jerome — said they wanted to find projects as meaningful down the road.

Mark Kennedy is at http://twitter.com/KennedyTwits