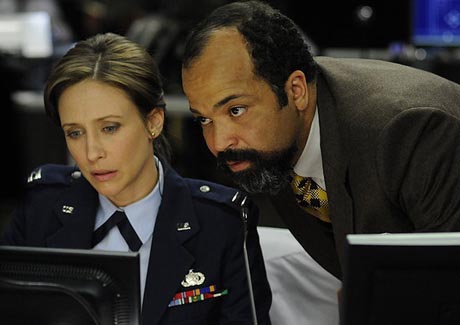 Air ForceCaptain Colter Stevens (Jake Gyllenhaal) has been comatose ever since his helicopter was shot down during a rescue mission over Afghanistan. The incapacitated pilot had no way of knowing that while languishing in a vegetative state he was being recruited for the "Source Code," a top secret program aimed at enabling him to inhabit another person's brain, telepathically.
And exactly how, pray tell, might the highly-decorated veteran accomplish such a superhuman feat?

Interview: Rep. Maxine Waters on HIV/AIDS in the Black Community

'Health disparities for people of color are getting worse, and more and more people are going without health insurance'

From his comedic roles in "Barbershop," "Bernie Mac Show" and the "Scary Movie" franchise to more serious roles in Hustle and Flow, The Shield and Law and Order, Actor Anthony Anderson has one diverse resume.
Anderson is appearing as Deputy Perkins in "Scream 4," the latest in the Wes Craven horror franchise due out on April 15.

Here, Nicolas Cage talks about his latest film, Drive Angry 3-D, a supernatural thriller where he plays a fugitive from Hell intent on rescuing his granddaughter from the gang of goons who also murdered his daughter.

Louis Gossett Jr.: A Chat Between a Gentlemen and Journalist

Last year, Lou published his aptly entitled autobiography, "An Actor and a Gentleman." Here, he talks about his new movie, "The Grace Card," a faith-based tale of reconciliation and redemption

Details
Written by By Brian Stimson of The Skanner News
Published: 24 February 2011

Jb Smoove Talks About the Perils of a 'Hall Pass'

Comedian, actor and writer JB Smoove plays the character Flats in the new Owen Wilson/Jason Sudeikis comedy "Hall Pass" about two men given a week-off their marriages as a radical way to improve their relationships at home. Smoove is a former writer for Saturday Night Live and has starred in a number of films and TV show, most notably on Larry David's "Curb Your Enthusiasm" as Leon.
Smoove sat down and spoke with The Skanner News about his acting, improving and why getting a "Hall Pass" from your wife is just a little bit insulting.

Oscars: Who Will Win, Who Deserves to Win, Who Was Snubbed

The King's Speech is this prognosticator's favorite to land the most Oscars this year primarily because the Anglophilic Academy adores English accents, especially in costume dramas revolving around the Royal Family.

Just Run from 'Just Go with It'

Sandler, Aniston flick is a badly made cliche

"The Big Lie" is a shopworn formula which has been recycled by countless television sitcoms since serving as the premise for almost every episode of I Love Lucy. The age-old theme typically revolves around a morally-compromised protagonist who ends up ensnared in an ever-expanding web of deception after telling a little fib at a moment of weakness.

Details
Written by The Associated Press for The Skanner News
Published: 12 February 2011

Jennifer Hudson: How She Survives After Tragic Murders

In a tearful interview, singer and actress Jennifer Hudson said she's still trying to make her mother proud, and that's what has kept her going since her mother and two other family members were murdered.

The new film premiers on Feb. 11

Here, Van Jones talks about all of the above, and about his appearance in Carbon Nation, a cautionary documentary about the consequences of climate change. The film opens in theaters in New York City on February 11, and will open elsewhere around the country later in the month and in March before becoming available on DVD in April.