Jb Smoove Talks About the Perils of a 'Hall Pass'

By Brian Stimson of The Skanner News
Published: 24 February 2011 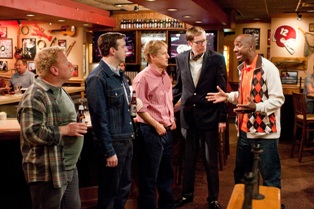 Comedian, actor and writer JB Smoove (far right) plays the character Flats in the new Owen Wilson/Jason Sudeikis comedy "Hall Pass" about two men given a week-off their marriages as a radical way to improve their relationships at home. Smoove is a former writer for Saturday Night Live and has starred in a number of films and TV show, most notably on Larry David's "Curb Your Enthusiasm" as Leon.

Smoove sat down and spoke with The Skanner News about his acting, improving and why getting a "Hall Pass" from your wife is just a little bit insulting.

The Skanner News: Not a lot …

JB: Don't try to be all laid back with me. What's going on Brian?

TSN: How are the reporters treating you today?

JB: Man, we've been having a good time, just flying through these things. I think I'm at number 339.

JB: They're killing me.

TSN: I'll try to keep you on your toes the best I can. I was just going to start with a really boring question, but I'll cut to something a little more interesting. What was the absolute, worst day on set you had for "Hall Pass"?

JB: You know what, there was one day, it was so damn cold, it was freezing, bad weather, raining like crazy, freezing rain, freezing rain is the worst, it was cold, we had to try to … they didn't want us to have cold breath, right, so they had to warm the area up. It was supposed to be spring time, but we're shooting in the winter. Who would have thought it would be that bad a winter in Atlanta? We were near some water on the river, that made it worse. Freezing rain everywhere, the ground was slick, we had cold coming out of our mouth sniffling, it was crazy, in Atlanta, Georgia.

TSN: Who's the most fun person to work with on the film?

JB: Steven Merchant, man. Of course Owen and Jason Sudeikis were amazing, but that damn Steven Merchant, that dude was 7'13" … he was tall as hell. Normalluy, I'm the tall guy when I come to do movies. I don't like coming to movies and there's a taller dude than me. I don't like that, man. I wanna be the tallest dude in the movies. So I decidd to take the Black role.

TSN: Now when you're acting, do you kind of be yourself, or do actually act and put on a different persona?

JB: It depends on what they want. Sometiems I'll meet a director and he'll tell me what he wants and I'll read the character and its like, this character is going to be a fast-talking, opinionated, blunt character, … a lot of times, they see me on "Curb Your Enthusiasm", that's what they want, to spice up the character, sometimes they want that. I can do the same thing in a different style, slow it down and say crazy stuff … I can slow it down and make a point so you can understand what I'm saying to you. For me, I've been lucky enough … I like my brain, I like my style, I've been trying to attach myself to a number of things and right now it's working well. Now directors call me for film and TV stuff and I can sit there and say, they are either big Curb fans and they know what they want, they want that flavor, that outspokenness, that funny guy who can take a scene and make it his own. At the same time, I'm in another film right now where I'm playing someone totally opposite. It's a different type. Still has that rhythm, but he's a different type of guy. That becomes me sometimes.

TSN: I saw a clip online of you reading your failed skits from Saturday Night Live. I was wondering, do you ever get a chance to unearth those out of the back of your brain and use them or do any other improving?

JB: Oh yeah. I have so many ideas. I must have 200 to 250 bits written in my SNL book. You know what, I kind of go by … I improv on Curb so much … when I come in and do a film, they want me to take a character and make it my own. Do what I want to do sometimes. I've been lucky, I guess. Curb came in handy because I had an opportunity to come in there and talk that trash. If they want that, that's what I'm giving em. It's worked out great for me and a lot of times, I definitely pull out anything that fits. A lot oftimes things come to me in weird ways. Something will remind me of a bit and I"ll incorporate it within a scene someteims, or a part of it or a piece of it, and then I'll just try to incorporate it with what the scene requires. Most of the time, we'll get it down for what the scene requires and then they'll say 'give me one for you.' If they say give me one for yourself, I'll go off and rant and rant and rant. It's the same scene, with just different words.

TSN: Did they give you that kind of freedom for 'Hall Pass'?

JB: They give it to you a little bit. Sometimes, when you're following lines, it sounds robotic. But if you flow, do one on you own, it comes out natural. It's just you. That's the most fun, cause it's the most natural to me.

TSN: Now what is the character you play in 'Hall Pass'?

JB: His name is Flats, he's just one of the guys in the crew. Trying to encourage the guys to take advantage of the hall pass they have. They got a week off … a week off with their wives. Why not? I'm going to ride with you guys, live vicariously, hear about the stories and the women. I want to hear what happened, because I couldn't get a hall pass. How was the blonde rich, how was the brunette, cause I wanna find out the details. I want to see you guys succeed. Women give guys hall passes, because they know damn well they have no chances of getting with women. It's more of an insult to give a guy a hall pass, knowing full well they're not going to get none. So you got to be better than them, and take that hall pass and rub it in her face.