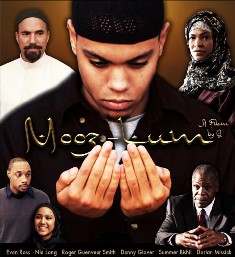 Since 9/11, Muslims have basically become the N-words of the new millennium, being indiscriminately demonized in much the same way young African-Americans were universally vilified by the FBI during the rise of the Black Power Movement. In the wake of the civil unrest triggered by the assassination of Dr. Martin Luther King, simply walking the streets with an afro was all the probable cause a cop needed to stop and frisk anyone who resembled a radical figure like Huey Newton, Stokely Carmichael or H. Rap Brown.

Such state-sanctioned mistreatment inflicted harm unlikely ever to be undone on impressionable young minds trying to figure out their place in the world, since it made the U.S. suddenly feel more like an oppressive police state than the proverbial land of the free and home of the brave. And it is a similar sort of predicament which is sensitively explored in "Mooz-Lum," a coming-of-age flick by Qasim "Q" Basir.

At the point of departure, we are introduced to Hassan Mahdi (Smith), an overbearing patriarch who forces his family to follow an orthodox, Islamic regimen. Wife Safiyah (Long) is unhappily-married because her husband's too strict on the kids. Still, she won't divorce him because she feels they need a father figure in their lives.

Consequently, their miserable son, Tariq (Ross), aka T, routinely removes the kufi he's supposed to wear, as soon as his dad drops him off at school. And he also has to hide the fact that he has an innocent crush on a Catholic girl (Molly Paddock) he met in the woods. Meanwhile, his sister, Taqua (Kimberley Drummond), has her own issues, having to keep her head and body covered in modest Muslim garb that makes her stand out like a sore thumb.

The plot thickens when T's faith is tested his freshman year of college, between being teased by a trash-talking classmate (Vladimi Versaillies) who lives across the hall and being attracted to a cute coed (Maryam Basir) who turns his head. On the one hand, he does his best to distance himself from his devout roommate, Hamza (Kunal Sharma), yet he's not really ready to behave like a party animal either.

Elsewhere at the university, a Muslim professor (Dorian Missick) is having his tenure subtly threatened by a dean (Glover) who doesn't appreciate his proselytizing. But then, all of the above is overshadowed by the events of 9/11 when an ugly mob starts roaming the campus in search of easy targets to take out their frustrations on.

A poignant, cinematic memoir of growing up Muslim in America from the perspective of an anguished soul who just wanted to enjoy a normal childhood.