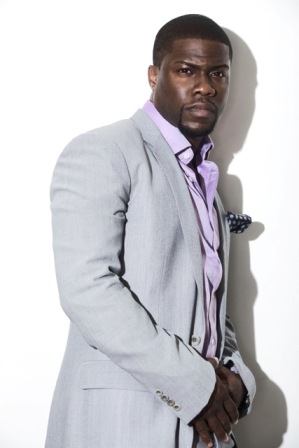 Comedian and actor Kevin Hart, who will be appearing in a cameo in the upcoming Ben Stiller/Robert DeNiro franchise "Little Fockers," sat down this week to speak with The Skanner News. Hart has appeared in such films as "Soul Plane," "The 40-Year-Old Virgin," and several television series. The Skanner News: Hart Standup

The Skanner News: Hey Kevin, thanks for taking the time out of your schedule to talk with me. Where are you right now?

TSN: Tell me a bit about your role in "Little Fockers."

TSN: What's it like working as a comedian alongside other comedians who have garnered a lot more fame?

KH: It's amazing when you see yourself among the company of greats, you're along the right path. It'll only get bigger and it'll only get better. For me right now, I feel like that's the case. Working withben still er and Jessica alba and being around Robert deniro and barabara Streisand, and dustin Hoffman these people are … to be a part of that cast in any way you can, you definitely have to take advantage of that opportunity.

TSN: Did you get a lot of freedom to when working with the director to be yourself and improvise or did you stick to the script?

KH: I stuck to the script, but they let me play as well. It was a good balance.

TSN: I'm curious about your comedy and I've always been fascinated by the idea of failure. When's the last time you absolutely bombed a joke? Has that ever happened to you?

KH: Wow. I think the main thing when you're dealing with something like that, for me I'm working out and doing work in different jokes. I've tanked a lot. But you don't know what's not funny until you try it. And that's how jokes get better. Everything you come up with isn't always a slammer. It's not always hitting home and going thought the of and people are going crazy for it. At a certain point in time, you have to go and take risks. When you're taking those risks, sometimes you realize things aren't as funny as you thought they would be. Then you go to intimate settings and try 'em out so it won't hurt you.

TSN: What do you like better, stand-up comedy or acting?

TSN: What is it about stand-up that excites you?

KH: It's my job. That's what I started doing first. Acting came because of stand-up comedy. That's what I'm good at, I'm my own boss, it's my craft, I love it. With that being said, it doesn't control me, I control it. You know, I work when I want to work I don't work when I don't want to work. But acting is different, you don't have control over it. You don't know when your next project is coming, unless you're producing and writing and starring in them, you don't know when you're going to work.

TSN: Do you see the acting as a vehicle for your stand –up?

KH: Of course. At the end of the day, more people will see your face.

TSN: How do you balance your family life with production schedules?

KH: Well I mean you balance it as it comes, be strict and sticking to it. My balance comes so I'm gone on Saturdays, Sundays and Mondays and sometimes Friday. So Tuesday, Wednesday, Thursday are when I see my kids. Same schedule over and over in the week.

TSN: Do you ever bring your family to the set?

KH: Of course, when it's convenient. I don't want my babies doing setting out on flights landing and taking off on another one in the morning. If someplace is convenient and I'm there for a couple of days, yeah, I'll bring 'em.

TSN: Did you bring them to the set of the "Little Fockers"?

TSN: Do you seek out character roles or do they find you because of your comedy?

KH: I'd say they find me, so far with everything that I've done movie-wise, they're saying, they're things I can feed off of or bring more to. At least that has happened over the last few years. I'm working on stand-up comedy doing what I do and movies come at me, you know, and if it's something I feel I should take, I take and if not, I don't. They come at me sporadically.

KH: Not really a character actor. As far as going and playing roles you wouldn't normally play, or getting casted on something that's so far above me, to find our who you really are, those things are fun.

TSN: Who did you have the most fun with on the cast of "Little Fockers"?

TSN: Do you ever get intimidated working with someone like Ben or Tracey Morgan?

TSN: Fear is the mind-killer.

KH: Yeah. Ignorance is bliss. Don't think about it. You'll be fine.

TSN: What projects are you looking forward to in the future?

KH: Just my next special, "Laugh At My Pain." We're shooting that and putting it in theaters. I think it's going to be good.