Interview: The Guy Behind 'Guy and Madeline' 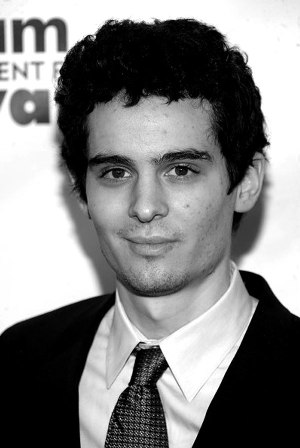 Damien Chazelle was born in Providence, Rhode Island on January 19, 1985, but raised in both the U.S. and France. As a teenager, he won Best Drums at America's Best High School Jazz Competition in 2003 and Best Rhythm Section Soloist at the Dunellen Invitational Jazz Festival later the same year.

Damien attended Harvard University where he studied filmmaking and began work on his senior thesis, Guy and Madeline on a Park Bench. He wound up leaving school to expand the thesis into his first feature film, shooting off and on over the course of two years, and finally graduating in 2008.

Shot on black-and-white 16mm for about $60,000, "Guy and Madeline" premiered at the Tribeca Film Festival and went on to play at over 20 other film festivals. It received a Gotham Independent Film Award nomination for "Best Film Not Playing at a Theater Near You"; and was named the best unreleased film of 2009 by film critics Amy Taubin (Film Comment), John Anderson (Variety), David Fear (Time Out New York), and Elizabeth Weitzman (New York Daily News).

Kam Williams: Hi Damien, thanks for the interview.

Damien Chazelle: It's a pleasure.

KW: What was the source of your inspiration to write Guy and Madeline on a Park Bench?

DC: I wanted to make a musical. And I wanted to make it the way I was used to making movies. I'd been shooting documentaries in school, hitting the streets of Boston with a handheld camera and a mic, and I wanted to make a musical that way. I think musicals are all about the transition from reality to song. They're about that passage, the moments right before and after musical numbers, when things are at their most uncertain. It's all about song and dance springing from everyday life—whether from a fallen newspaper or a lamppost or a coat rack, or something as mundane as riding a trolley car—and I wanted to make sure I focused on that: finding the musical in the ordinary.

KW: Why did you decide to shoot it on B&W 16mm film? What were the pros and challenges associated with those choices?

DC: 16mm was the format I was most comfortable with. I'd been shooting on these old-school Aaton cameras and cutting on Steenbecks for a few years, and when it came time to make Guy and Madeline, I saw no reason to change my methods. Plus, there's something about Black-and-White 16mm—the grain, the texture, the noise. There are things you notice when your eye isn't distracted by color, little things that might otherwise be obscured.

KW: This was a very ambitious production for a first film, being a musical with an original score jazz score. Did you ever feel like you might be biting off more than you could chew?

DC: All the time. But look at old musicals like Love Me Tonight: those guys bit off more than they could chew. The movie's a mess. But it's a wonderful, exhilarating, gorgeous mess. Who needs clean, cut-and-dry films when you can have movies like that? I'm reminded of Truffaut's maxim, which I heard Arnaud Desplechin posts over his desk as well: "Every minute, four ideas."

KW: Watching Guy and Madeline, one can't help but notice that it pays homage to a number of legendary directors and screen classics. How have you developed an encyclopedic knowledge of cinematic history at such a young age?

DC: I've been watching movies since I can remember. Probably too many movies. But all that watching has helped me process genre. Ten years ago, I hated musicals. Every time someone broke into song I got pissed. But I kept watching musicals. More and more of them. And, at a certain point, I fell. And I can't say I've fallen in love with any single genre the way I've fallen for musicals. It's a real love affair.

KW: How did you come to settle on Jason Palmer and Desiree Garcia for the title roles? Was that by design or just the coincidental result of colorblind casting?

DC: I guess I'd say it was coincidence, because I had not written the characters as belonging to any particular race or ethnicity. But talk about coincidence: while we were shooting, Desiree (Madeline) was actually writing a dissertation on race musicals of the Thirties. I found her through a former tap dance teacher of hers, not through her academic work. She was cast quite early on in the process. Finding Guy proved a real challenge. I looked at lots of people—all musicians, because I wanted a real musician, not an actor playing a musician. Then one night I went to see a jam session at Wally's Jazz Café. And there was Jason, blowing his trumpet on-stage, and I was floored. He owned the entire room. It took less than a minute for me to know for certain that he was Guy, and that the movie had to revolve, at least in part, around him and his world.

KW: Were you surprised by the universal critical acclaim the picture has received?

DC: Very. I made the movie I wanted to see. It's been a delight to hear other people wanted to see it as well.

DC: I'm always hoping to be asked if there are any musical numbers we shot and then cut out. Because I have a great answer: yes, three total, one of which involved us shooting on train tracks that apparently bordered a nuclear reactor, which resulted in myself, my actors, and crew being surrounded by six cop cars (and one cop on a motorcycle—the cherry on top), being grilled for an hour, with one of our producers taken aside when a cop realized he was Romanian, and finally let go with a warning. We pled "stupid art students," which worked. Thank heavens that we not only evaded arrest but kept our precious negative. Of course, the scene never made it into the final cut. That's life.

DC: I was very afraid when I saw six cop cars and a motorcycle speeding my way.

DC: Very much so. I wanted to make a musical, and I made one. Along the way, I fell in love and got married to my collaborator/producer Jasmine McGlade, who is also a filmmaker with her own first feature on the way. It's been a great ride.

DC: I recently watched an episode of Millionaire Matchmaker. It was hilarious. Hilariously great.

DC: I talk to Jasmine.

DC: That's a tough one. I've never wanted to do anything else but make movies. For me, there's just nothing like a movie screen. You throw all your fears and dreams and neuroses and anxieties and hopes and ambitions at it, and it talks right back.

DC: I'm almost done with Sarah Thornton's "Seven Days in the Art World." Before that I read Raymond Carver's collection of short stories "Will You Please Be Quiet, Please?"

DC: Lady Gaga, Ornella Vanoni, and the songs from Gentlemen Prefer Blondes and I Love Melvin.

DC: I'm not good with clothes.

DC: Make a film that goes down in history.

DC: The smell of fresh paint in a condo my family was staying at.

KW: The "Realtor to the Stars" Jimmy Bayan's question: Where in L.A. do you live?

DC: Make a movie. Don't wait around for the perfect project to fall into your laps. Just go out and do it. And if you have no money, do it anyway. These days, you can make a movie for nothing. As long as you can spare the time—and, granted, not everyone can—there's no excuse.

KW: The Tavis Smiley question: What do you want your legacy to be?

KW: Thanks again for the interview, Damien, and best of luck with the film.

To see a trailer for Guy and Madeline on a Park Bench, visit: