Adewale Akinnuoye-Agbaje: Acting As a Search for Truth 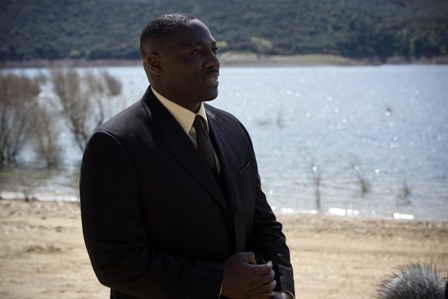 Born in England in a family of Nigerian immigrants, Adewale Akinnuoye-Agbaje has built his acting career in television and blockbuster films that span action, drama and comedy. His face is familiar to millions of TV viewers for his roles as Mr. Eko in "Lost," and Simon Adebisi in the cult HBO prison drama, "Oz." Akinnuoye-Agbaje's work stands out for his ability to bring multi-dimensional characters across cultural and national borders. He co-stars with Dwayne Johnson in "Faster," opening this week – in which Akinnuoye-Agbaje plays a Southern evangelist preacher. His next project is even more of a challenge. The Skanner News' Lisa Loving spoke with him this week about his art, his motivations, and the secret of his wide-ranging career.

The Skanner News: Where are you right now?

Adewale: Right now I'm in Nottingham, it's a town about three hours north of London. I'm on the set of my latest film, "Best Laid Plans," which is a modern adaptation of the book "Of Mice and Men," in which I'm playing the Lenny character.


TSN: That's quite a literary role.

AAA: That's right. It's quite a leap from our friend the Evangelist, let's put it that way, in "Faster." Both of these roles are very different in nature, and challenge me to extend my range. That's why I really loved being the Evangelist, because he's embedded in part of the Black American history that I relish, you know, Martin Luther King-esque kind of feel. But there's a great arc in the character, you see who he was before. Obviously being British, it's an opportunity for me to get into another culture, another accent, another language. And then with the full regalia – the choir – it's just one of those roles, as an actor, you relish. Certainly I was, being part of that African American snippet of history.


TSN: You know what's really interesting, looking at your history of films, you have a foot in so many different cultures, and it's really fascinating to hear you talk about your relationship with African American culture. I mean as a Brit, and as a child of Nigerian immigrants – I would have to describe you as a really truly international person. So what is your relationship with African American culture?


AAA: Well, I mean really, it's a source of inspiration and the foundation of my career, to be honest. I mean obviously being an immigrant, or the son of immigrants that migrated to England, I was placed in England at a time when there was a lot of racial tension and just an unwillingness to accept the immigrant population. In fact we were the first Black British generation that was born there, so we got the brunt of that. Any time there's any kind of something new there's always teething problems, and it took the form of a skinhead subculture, so I was subjected to a lot of racism and brutality growing up.


And what always gave me hope and inspiration was actually watching images on the TV from things like "The Cosby Show," "Fresh Prince of Bel Air," because it really signified to me that there was another reality for me as a Black man. And the moment I got the opportunity I just leapt at it. I didn't know at that point what I wanted to do, I just knew what I didn't want to do and what I didn't want to be at that time.


TSN: One of the things I'm always curious about artists such as yourself is who are the other artists or people who inspired you to do what you do.


AAA: There's a whole range. I like the classic era of Hollywood—Peter Lorre, Kirk Douglas, you know, some of those greats, right up through Daniel Day Lewis, Jeffrey Wright, Sean Penn, because for me they signify the artistry in our craft, and they always seek the truth in their characters and in their performance. So I always aim to emulate that and be around those kinds of actors, because I feel I'll stretch out my reach and that's what you want to do as an artist.


TSN: The obvious follow up is – when you look at the work you've done I can't think of very many actors who move so seamlessly between drama and action – "The Bourne Identity" action films, "Lost," and "Ace Ventura: When Nature Calls." And I just remember you so well in that episode of "Monk." That was one of those episodes that make you cry! So how do you do that? Do feel like that's remarkable? Or do you have to put on a different hat? Because you just have an ability to dig right into the emotional reality whether it's silly or whether people are being shot at or whether it's making this heartfelt relationship within the script. What's your secret?

AAA: I think my secret is the quest for truth in the character. And I don't want to cheat the audience of an ounce of that truth. So to me I just want to give them every last drop of myself in portraying a character because if they're not passed through the performance being inspired then I haven't really done my job. And also I think this is a personal quest – I enjoy the journey of discovering the characters, particularly with a character like Monk and even the Evangelist – every time you close yourself in with these characters, with the spirits of these characters, it's a journey, and one that's really meaningful and enjoyable. It's something that I think I was born to do.

I wouldn't put it on somebody because it's not easy, migrating and going between these different realms. Certainly with Monk I was up against an extremely good actor, Tony Shalhoub, who just makes that process easy. And even with Dwayne in his movie—I think the audience will be blown away by the level of the drama and the performance, because I was. There were scenes where we really went for it, because it's rare that you see two big men onscreen being that emotional but at the same time still having the dignity and the masculinity of a man. There are a couple of lovely scenes that we relished, but Dwayne was just on point, and he cried in the scenes several times; we only did two or three takes and nailed it. It's always a pleasure when somebody comes to work. And he came.


Watch a preview of "Faster" here.