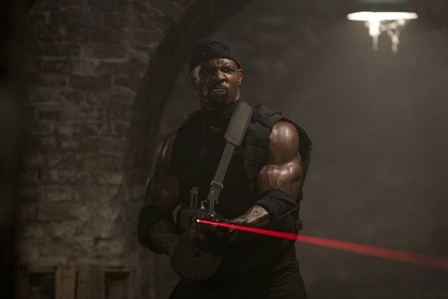 Hailing from Flint, Mich., Terry Crews has not only one of the most recognizable faces around, but maybe one of the most recognizable physiques as well. The handsome hunk is currently one of the busiest actors in Hollywood, having a trio of flicks released in August alone, namely, The Expendables, Lottery Ticket and Middle Men. He's also starring in Are We There Yet, the hit new TV sitcom airing on the TBS Network.
Prior to entering showbiz, Terry attended Western Michigan University where he blossomed into a football phenom as a walk-on. Senior year, he was drafted by the San Diego Chargers, and then went on to enjoy a six-year career in the NFL.
Since retiring from pro football, Terry has already compiled over 40 screen credits, including memorable performances mostly flexing his pecs in Training Day, Terminator Salvation, Street Kings, Get Smart, Idiocracy, Balls of Fury, Gamer, Starsky & Hutch, The Longest Yard, Deliver Us from Eva, Friday after Next, White Chicks, Malibu's Most Wanted, Click and The Benchwarmers. And on TV, he's appeared on The District, My Wife and Kids, CSI: Miami, All of Us and Everybody Hates Chris.
Terry and his wife, Rebecca, a former beauty queen and Christian recording artist, recently celebrated their 20th wedding anniversary. The couple lives in L.A. where they are raising their five children.

Kam Williams: Hey, Terry, thanks again for some time.
Terry Crews: Oh, you got it, my man, how're you doin'?

KW: Very well, thanks. Gee, your career has really taken off since the last time we spoke.
TC: Brother, I'm hustling!

KW: Well, you deserve all the success that's been coming your way. It's especially great to see you get a chance to exhibit your range playing a lead in your very own sitcom after being typecast a lot in beefcake roles.
TC: Thank you. It feels kind of weird, because I feel like I've got this market all to myself right now, at least until some bigger dude comes along who's funnier. They don't even have a big, buff white with his own sitcom right now.

KW: Do you feel a little funny playing Nick on Are We There Yet, given that the role was originated by the show's executive producer, Ice Cube, who is also in the cast?
TC: Yeah, at first, I felt a little funny when I got the call saying they wanted me to play Nick who Cube played, because a lot of people liked that movie and I just didn't want to be the one to mess it up. But the fact is, Cube has been validating me by letting me know that, "We want you to be you, just be Terry Crews and do what you do." And the bonus of having him acting in the series kind of validates it and gives the show his stamp of approval.

KW: So, you're not intimidated by the presence on the set of the actor who originated the role?
TC: No, no, never, never. The only thing intimidating about Cube is that he's the father of gangsta' rap. You just worry about getting your lines right, or he might shoot you. [Laughs]

KW: How's it working opposite Essence Atkins who plays your wife?
TC: Let me tell you, I always wanted to work with Essence ever since seeing the way she was doing comedy in Dance Flick. She's so gorgeous, you had to wonder whether she's willing to get a little ugly and whether I was getting a person I could really bounce off of. But she's been great! And I just really feel blessed to be working with this entire cast and crew, it's been like a family.

KW: Well, one of your three movies opening this month is The Expendables, co-starring Sylvester Stallone, Arnold Schwarzenegger, Mickey Rourke, Jason Statham, Stone Cold Steve Austin, Jet Li, Dolph Lundgren, Bruce Willis and Randy Couture. I've never seen so much beefcake in one movie.
TC: I'm telling everybody, "Bring your deodorant to the theater, because it's going to be funky from all those dudes in there." [Laughs]

KW: Was it a nightmare on the set with so many big egos to juggle?
TC: No, it was awesome! Look, there are egos everywhere. There was definitely a pecking order, and when Stallone walked in, we were like, "All hail!" He came in with his big forearms, pointing and telling everybody where he wanted the cameras with his big cigar ablazing, and you just go, "This is Stallone!" with admiration, because none of us would be here without this guy. That's the thing, he changed movies forever. And remember how he wrote the first Rocky in a few days, and wouldn't sell the script even though he was starving, because they wanted to put somebody else in the lead role. To see what he's accomplished, dog, that's what it's all about.

KW: Did you learn anything from working with him?
TC: Yeah, he took me under his wing, and showed me a lot of what being a star is all about. It's really about humility. He works the hardest. Like they say, "To be king of all, you must be servant of all." He was out there doing everything.

KW: How was it making Lottery Ticket?
TC: I have the greatest appreciation for [producers] Matt Alvarez and Ice Cube. They put me in Friday after Next, and now this, which I hope is just the start of a long, wonderful relationship. I love the urban comedies, because they keep you famous, keep you having fun, and keep you in love with the business. Those are my roots. I'll always love doing those.

KW: Is there any question no one ever asks you, that you wish someone would?
TC: Wow! I think I've been asked almost everything. [LOL]

KW: The Tasha Smith question: Are you ever afraid?
TC: Yeah, I'm scared of my wife. [Chuckles]

KW: The Columbus Short question: Are you happy?
TC: Yes I am. I'm very happy. I'm doing what I love.

KW: The Teri Emerson question: When was the last time you had a good laugh?
TC: Yesterday, seeing how people were reacting at a screening.

KW: The bookworm Troy Johnson question: What was the last book you read?
TC: The Relationship Cure by this guy named John Gottman. It just talks about how to improve your relationship with your wife. http://www.amazon.com/gp/product/0609809539?ie=UTF8&tag=thslfofire-20&linkCode=as2&camp=1789&creative=390957&creativeASIN=0609809539

KW: The music maven Heather Covington question: What was the last song you listened to?
TC: Let's see, it was "Forever" by Drake from that More Than a Game soundtrack. http://www.amazon.com/gp/product/B002LFAHDC?ie=UTF8&tag=thslfofire-20&linkCode=as2&camp=1789&creative=390957&creativeASIN=B002LFAHDC

KW: The Ling-Ju Yen question: What is your earliest childhood memory?
TC: Hmmm… Christmas... I think I was about four years-old. Yeah, Christmas.

KW: When you look in the mirror, what do you see?
TC: I see a wrinkled head! [Giggles]

KW: If you could have one wish instantly granted, what would that be for?
TC: Wow! That we would all be in Heaven.

KW: What advice do you have for anyone who wants to follow in your footsteps?
TC: Have resolve! Just be resilient, and never, ever, ever stop!

KW: What is your favorite dish to cook?
TC: Buffalo rib-eye steaks, on the grill, is my favorite meal, seriously. It has less fat, more vitamins and more protein than beef. It is wonderful. Look, it was what the Indians ate, and they were very healthy. It's very good meat.

KW: The Boris Kodjoe question: What do you consider your biggest accomplishment?
TC: My family. When I look at my family, that's all life means, right there.

KW: The Mike Pittman question: Who was your best friend as a child?
TC: My best friend is was a guy named Darwin Hall. And he still is my friend today.

KW: What is your guiltiest pleasure?
TC: Dessert. [LOL]

KW: The Laz Alonso question: How can your fans help you?
TC: By just being respectful and cool.

KW: What was the biggest obstacle you had to overcome in life?
TC: Coming out of Flint, Michigan. I went back there recently to visit my parents. The city's still deteriorating, which is very, very sad to see.

KW: The "Realtor to the Stars" Jimmy Bayan's question: Where in L.A. do you live?
TC: Pasadena.

KW: The Tavis Smiley question: How do you want to be remembered?
TC: As a great father.

KW: Thanks again for the interview, Terry, and best of luck with all your many endeavors.
TC: Thank you, Kam, it was nice speaking with you again. Take care.