Tavis Smiley: The 'Been in the Storm Too Long' Interview 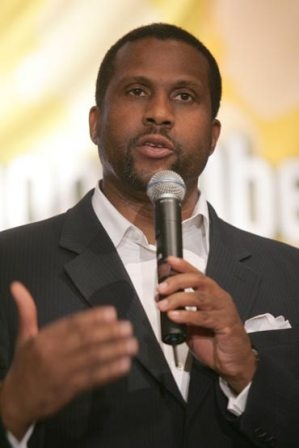 From his celebrated conversations with world figures, to his work to inspire the next generation of leaders, as a broadcaster, author, advocate and philanthropist, Tavis Smiley continues to be an outstanding voice for change. He is currently the host of the late night television talk show Tavis Smiley on PBS and The Tavis Smiley Show on Public Radio International (PRI).
Time Magazine honored Mr. Smiley in 2009 as one of "The World's 100 Most Influential People." The Smiley Group, Inc. is a communications corporation established in support of human rights and related empowerment issues. TSG serves as the holding company for various enterprises encompassing broadcast and print media, lectures, symposiums and the Internet.
Here, Tavis talks about "Been in the Storm Too Long," a special report on the city of New Orleans airing on PBS on July 21. He also speaks about the On Your Side Tour with Tavis Smiley, a series of free financial empowerment workshops he's staging in various cities around the country between now and the end of 2010.

See a preview of Been in the Storm Too Long

Order a copy of Tavis' autobiography