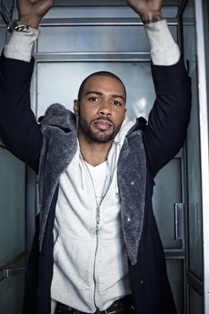 Born in Savannah, Georgia on January 9, 1974, Omari Hardwick was the second of four children blessing the union of Clifford and Joyce Hardwick. The family moved to Decatur where Omari excelled in athletics and established himself as a standout, eventually earning himself a college football scholarship.

Although he had demonstrated a certain flair for the dramatic early in life, it wasn't until his junior year at the University of Georgia that Omari that he began his formal training in acting. While there, he joined the Athens Theater Company and eventually starred in a number of plays including August Wilson's "Fences."
Soon after graduation, a knee injury cut short his plans for a pro football career. Omari then decided to focus on acting full-time and headed to New York City to hone his skills on the stage before making the move to Los Angeles.
After years of perseverance, Omari finally landed a breakout role when Spike Lee cast him as Dante' in Sucker Free City.
Omari's showbiz career has benefitted from a steady rise ever since, with the versatile thespian exhibiting an enviable acting range in such films as Miracle at St. Anna, Next Day Air, The Gridiron Gang, The Guardian and Beauty Shop. And among his upcoming offerings are The A-Team, For Colored Girls, Bolden and I Will Follow. Meanwhile, he's also appeared on TV shows like CSI: Miami, Crossing Jordan and Saved, and he currently co-stars opposite Dylan McDermott on TNT's gritty, cop series Dark Blue.
Here, Omari talks about his controversial new movie, Kick-Ass, the adaptation of the Marvel Comics series which opened up in the #1 spot at the box office.

KW: The music maven Heather Covington question: What are you listening to on your iPod?
OH: I've been listening to Usher's new album, and also some Stevie Wonder. But I like everyone from Bjork to Tupac.
KW: What is your favorite dish to cook?
OH: Salmon with carmelized crushed pecans on top. I like fish a lot, but I'm addicted to apples.
KW: When you look in the mirror, what do you see?
OH: Someone who's trying to grow. It's rare for artists to really stare deeply at themselves in the mirror, literally, because there's constantly a mirror on you. But figuratively speaking, I'm really into growth, so when I look in the mirror, I see somebody who's just trying to get better everyday.
KW: The Ling-Ju Yen question: What is your earliest childhood memory?
OH: [LOL] Being laughed at by my big brother and his friends. I was wearing Oshkosh B'gosh overalls while riding a duck tricycle very fast down a hill in Nashville. At the time, my father was in law school at Vanderbilt.
KW: The Uduak Oduok question: Who's your favorite clothes designer?
OH: That's a good question, Kam. That's a good question... I think classic Ralph Lauren is my favorite. It's timeless.
KW: What is your guiltiest pleasure?
OH: Krispy Kreme donuts.
KW: The Rudy Lewis question: Who's at the top of your hero list?
OH: Mother Teresa.
KW: The Laz Alonso question: How can your fans help you?
OH: By staying interested. Their interest alone humbles and flatters me.
KW: What do you want to be remembered for?
OH: For my consistency.
KW: Thanks again, Omari, and I look forward to speaking to you again soon about some of your upcoming projects.
OH: That sounds good, man. Take care of yourself and your family.

To see a trailer for Kick-Ass