Jill Scott: The 'Why Did I Get Married Too' Interview 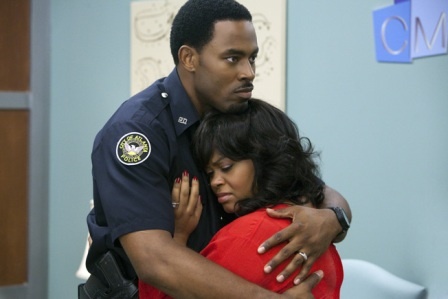 Jill Scott was born on April 4, 1972 in The City of Brotherly Love where she was raised by her mother, Joyce, and her maternal grandmother. A naturally-gifted child, Jill was speaking at 8 months and learned to read by the age of 4. She credits her

Jill Scott and Laman Rucker in 'Why Did I Get Married Too?'

mother for broadening her horizons by taking her to see plays and to museums during her childhood.
After graduating from the Philadelphia High School for Girls, Jill attended Temple University, working two jobs to put herself through college. She majored in English and planned to become a teacher, but dropped out of school after becoming disillusioned with the profession while spending time in the classroom as an assistant.
She started out in showbiz doing poetry readings which is how she was discovered by drummer QuestLove of The Roots in 1999. He invited Jill to join the band in the

studio where she collaborated with the group on writing their Grammy-winning hit, "You Got Me." This led to her being signed by the Hidden Beach label to record her debut album, "Who Is Jill Scott?" This launched Jill's phenomenally-successful musical career which has netted the sultry singer 3 Grammys thus far.
The talented triple threat has also published a book of poetry and made a phenomenal foray into acting via both the big and small screens. On TV, she's handled the lead role of Mma. Precious Ramotswe on the Emmy-nominated, Botswana-based, HBO series "The No. 1 Ladies Detective Agency." Meanwhile, she's received additional critical acclaim for her work in such movies as "Hounddog" and 'Why Did I Get Married?'
Here, she talks about returning to reprise the role of Sheila in the sequel to the latter, the latest modern morality play from Tyler Perry.

To see a trailer for Why Did I Get Married Too, visit:
http://www.youtube.com/watch?v=NSONVGYiIH